When sexually stimulated, nitric oxide (NO) signals cyclic guanosine monophosphate (cGMP) to inhibit smooth muscle contraction. This causes an inflow of blood into the penis which leads to an erection. The active ingredient known as icariin can increase NO synthesis in the penis leading to arousal.

In those with ED, phosphodiesterase type 5 (PDE5) inhibits nitric oxide and cGMP which can hinder sexual performance [1].

In addition to the cognitive benefit, icariin can increase testosterone and enhance bone health [3].

1. May improve libido and erectile dysfunction

Erectile dysfunction can affect people of all ages but the prevalence of ED increases as you age. As a risk factor for CVD, dementia and all-cause mortality, ED can have serious health consequences [4].

Men with ED are 1.33-6.24 more likely to have benign prostatic hyperplasia (BPH) than those without ED [5][6]. It appears that lifestyle, culture and diet affect ED as in some rural populations, the rate of ED is only around 1-2% [7].

The benefits of icariin have been mostly studied in older patients and are limited.

In rats, icariin improved the erectile function and NO levels after 1mg/kg/day for 4 weeks [10].

Another rat study gave doses of 0 – 200 mg/kg body weight for 35 days and found an increase in antioxidative activity at 50-100 mg/kg [11]. A dose of 50 and 100 mg/kg led to increased testosterone levels. The higher dose heightened oxidative stress, so there is definitely a balance that needs to be found when supplementing icariin. Doses of 50 and 100 mg/kg led to increased epididymal sperm counts.

A five year randomized control trial found that the group receiving supplementation of epimedium in combination with herbal medicine (Fufang) had increased bone mineral density and resulted in less than half the fracture risk than the control [14].

3. May protect the heart

In animal studies, epimedium can reduce oxidative damage in the heart, lower cholesterol levels and reduce the risk of blood clotting.

Epimedium provided to rats can have a cardioprotective effect against ischaemia and reperfusion (I/R) injury. I/R injury occurs when the heart is starved of oxygen due to reduced blood supply often due to a build-up of plaque in the wall of the arteries leading to the heart. The epimedium compound led to reduced oxidative stress and cell death in the heart compared to the control [19]. It also significantly improved cardiac function by activating the PI3K-Akt signaling pathway.

This has not been proven in humans however in animal studies, icariin can activate anti-aging pathways.

Sirtuins are a silent information regulation protease family [22]. Sirtuins, especially SIRT1 and SIRT6 have been researched for their role in longevity [23][22].

In mice, icariin has shown anti-aging benefits by increasing SIRT6 and inhibiting a pathway known as the NF-kB pathway [24].

Symptoms of aging were reduced in a clinical trial of 49 Japanese men taking a combination therapy containing icariin and other herbal medicines [9].

Icariin has also been shown to reduce beta-amyloid deposits in the brain in mice [25]. It may be a promising treatment in patients with Alzheimer’s disease.

Along with this study, icariin has been shown to improve spatial working memory, reduce APP and enhance the neurogenesis in the hippocampus of mice [26].

Perimenopause syndrome treated with epimedium complexes can lead to a regulating effect on the nervous system [28].

Platelet related cardiovascular disorders can result in serious health consequences including heart attack. The epimedium koreanum Nakai has been shown in vitra and in vivo to have antiplatelt and antithrombotic effects [29].

General benefits of icariin can extend to SIRT6 activation, which regulates metabolism, aging and disease [30].

Side effects are generally rare but the most common are fever, increased heart rate, aggressiveness, irritability and nausea. 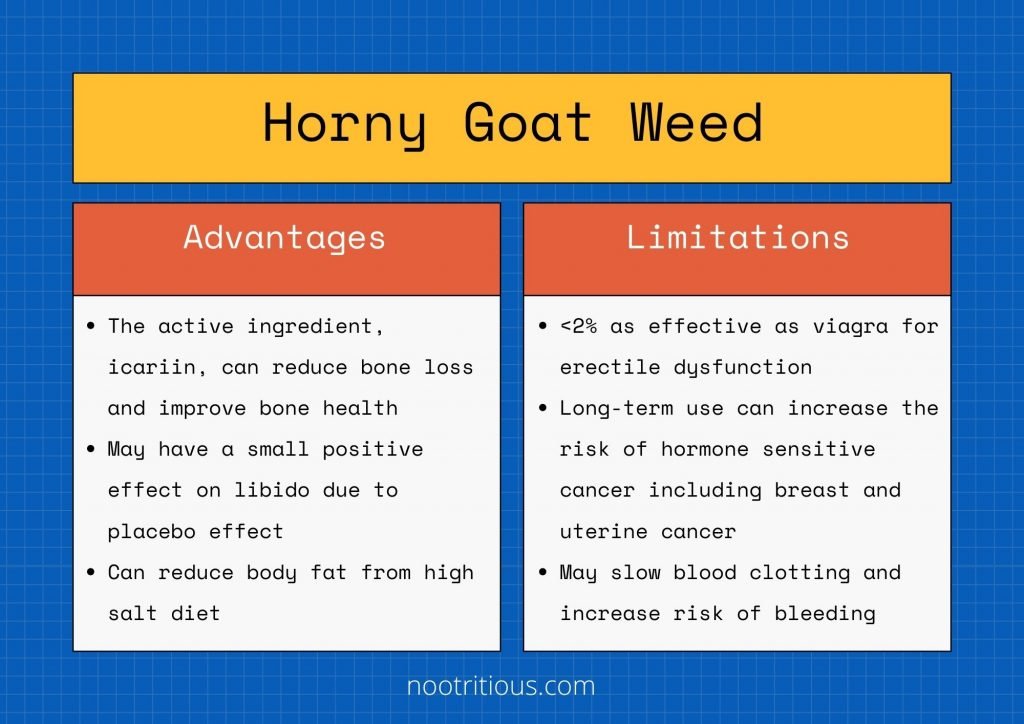 Verdict: Safe but not particularly effective

However the evidence suggests that it is far weaker than prescription medications that work by the same mechanism.

Overall, we have adequate evidence that it is largely an ineffective supplement.