Maitake: Benefits and Side Effects 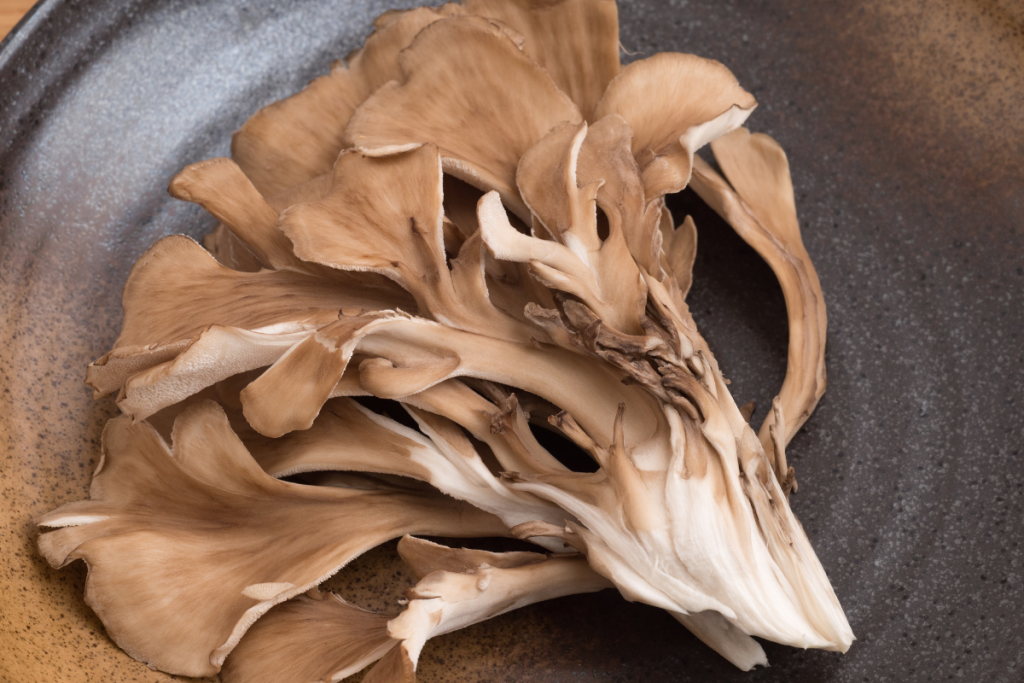 Image by y-studio via Getty Images

Scientifically known as Grifola frondosa and Hui Shu Hua in China, Maitake is an edible mushroom with a large fruiting body and overlapping caps. It is prized for its medicinal properties and in recent years has growing scientific evidence supporting its therapeutic effects. In recent years, certain countries including China have used maitake in conjunction with traditional cancer treatments.

Historically, maitake mushroom has been used in Japan and China as a popular dish due to its rich umami taste. The benefits of maitake can be traced back for thousands of years and in modern times it is mainly grown in Gutian.

Maitake mushrooms are a rich source of dietary fiber, vitamin D, minerals and B vitamins [1].

Maitake mushroom contains active ingredients in the form of beta-glucans. A type of polysaccharide, beta-glucans are a good source of soluble fiber.

In Maitake mushrooms, beta-glucans are combined with proteins to create a special type of compound known as glycoproteins.

Most research into maitake attribute anti-cancer benefits to a specific glycoprotein called maitake D-fraction. Along with benefits for cancer treatment, maitake d-fraction has been shown in studies to improve immunity and metabolism, lower blood pressure and improve cholesterol.

The beta glucan D-fraction join Dectin-1 receptors in the outer membrane of white blood cells such as natural killer and cytotoxic T [2]. Along with the ability of these cells to effectively destroy cancer cells, beta-glucans stimulate the production of signaling proteins in the immune system.

In recent research, studies have linked the therapeutic action of maitake to its capacity to change gut health [3]. These benefits of maitake mushroom arise from numerous compounds including both polysaccharides and glycoproteins. The fiber content in polysaccharides is believed to be responsible for the benefits for gut health.

Overall, the understanding of how maitake prevents cancer is limited however what is available is highly promising. 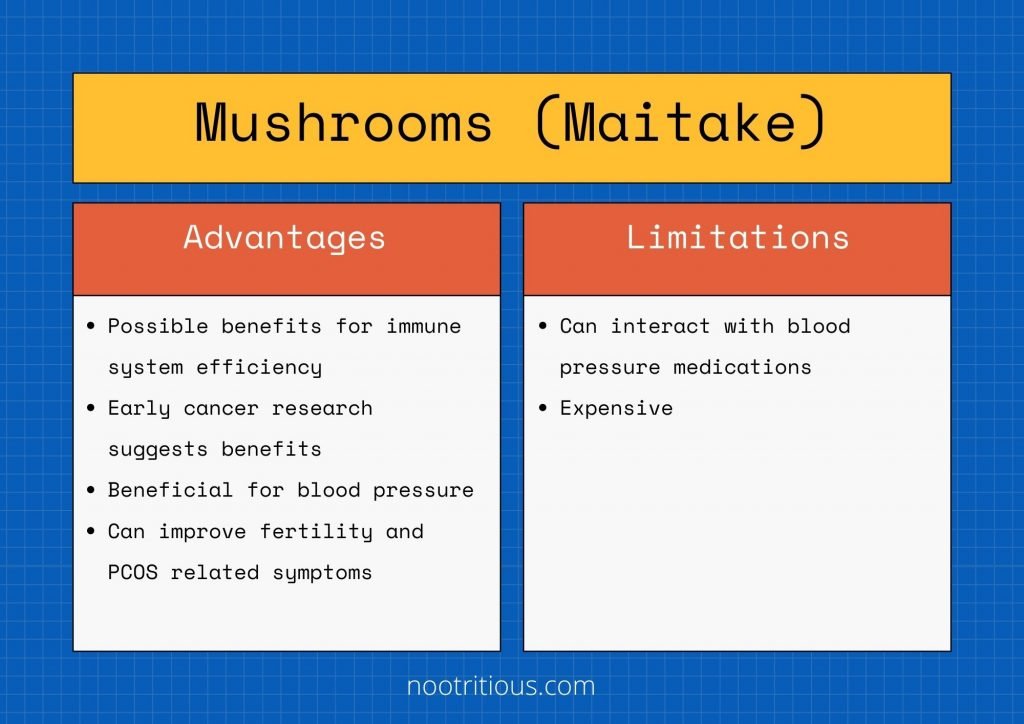 Maitake should be purchased according to the specific glycoprotein/beta-glucan interaction you want. D-Fraction for instance has effects on cancer cells that other polysaccharides may not. These polysaccharides work in other ways to increase metabolic health through altering gut microbiota.

Supplements combine maitake and vitamin c as this has been shown to boost the efficacy of active ingredients [4]. The polysaccharide and vitamin C interaction led to increased apoptosis in cancer cells [5].

The effective dose for maitake d-fraction is around 500-2500 mg per day, with the highest concentrations at levels of 30% proteoglucan. Most supplements do not contain high enough doses of proteoglucan for full benefit.

Who is it for?

For cancer specific, look for active proteoglucan on the label.

Not to say that polysaccharides are not useful, they are, but certain glycoproteins are more expensive to extract because they have certain health properties [3][5].

Maitake can also be purchased as a dry whole plant for cooking.

Store maitake in a cool and dry place. Ideally keep it in a paper bag. It should be refrigerated if not used immediately.

How to prepare dry maitake for cooking.

1. Soak the maitake mushroom for half an hour.

2. Cut away the hard stalk and rinse.

3. Using your fingers, rip it apart.

If cooking fresh maitake, they can be used in a variety of dishes including:

Always purchase from a reputable source that sells fresh produce.

Active hexose correlated compounds (AHCC) are purported to boost natural killer cell activity in those with cancer and are used in traditional chinese medicine. AHCC has also been used for its potential for treating HPV.

Compared to AHCC, maitake increasingly stimulated the immune system. A treatment of maitake and shiitake combined had the greatest effect with maitake alone also exceeding AHCC [6].

Those suffering from myelodysplastic syndrome have immature blood cells in the bone marrow that fail to develop into healthy cells. In MDS patients given maitake extract, there was an improvement in immune response as measured by an increase in neutrophil and monocytes [7]

Post-treatment maitake extract in older women with breast cancer led to both stimulatory and inhibitory effects on immune function [8]. As a result, cancer patients should be aware that botanical agents like maitake mushroom produce more complex effects and can in some cases be harmful.

The benefits of maitake have only been shown in early clinical studies. Never take maitake mushroom in place of traditional cancer treatments.

Cancer is an extremely complex disease state involving numerous pathways in the body.

The Maitake mushroom contains numerous active ingredients including D-fraction, Glycoprotein GFG-3a and GFP-A. These different active ingredients affect various pathways. Therefore they are able to affect the efficacy of certain cancer treatments, to either diminish or enhance traditional modes of treatment. In China, doctors have used D-fraction as an adjunctive therapeutic treatment for treating cancers since 2010 [9].

MD-Fraction was also shown to increase NK cell activity for up to 20 days after initial dosage [11].

Independent of age, maitake was able to hinder metastatic progress in patients with late stage cancer and lessen the expression of tumors [12].

Existing drugs for breast cancer development including tamoxifen and raloxifen are effective, but they also have unpleasant side effects [14].

Maitake D-fraction Pro4X improved survival by 700% compared to control [5]. Where the control group had a 10% survival rate, this specific maitake extract improved survival to 75% whilst protecting against metastases in the lung and liver. The dose provided was 5 mg/kg. This is a very promising study however it has major limitations – so treat it with caution.

It has been proposed that Maitake can improve fertility in PCOS patients as it can reduce insulin resistance. In one study, patients that did not respond to traditional treatment with clomiphene citrate were given maitake SX-fraction for 16 weeks. In those taking maitake SX-fraction alone, 20 of 26 patients succeeded in ovulation [16]. Metformin has also been used for PCOS in women with clomiphene resistance[5][17].

Most studies on the effect of Maitake for diabetes indicate that it can improve glucose control and metabolic health. This is attributed in part to the fiber content present in maitake polysaccharides.

Maitake has been used to help treat type 2 diabetes by doctors. In those given maitake, it led to lower HbA1c and glucose levels.

Maitake fraction X (FXM) at a dose of 140 mg led to a significant lowering of circulating glucose concentrations 8-18 hours after intake. This indicates enhanced insulin sensitivity [20].

Maitake may work by the same mechanism.

Side effects are uncommon and maitake is generally well tolerated. According to the American Cancer Society, maitake can be safety eaten as food and don’t pose a risk unless you are allergic.

In rare situations, maitake can lead to:

Maitake mushrooms can affect the metabolism of certain medications. In some cases this can be dangerous, and even lead to death. You should consult a medical practitioner prior to taking maitake.

Maitake can lower blood pressure, especially D-fraction. Therefore those taking warfarin need to be mindful [22]. Those taking blood pressure medications should consult a doctor to determine if it is safe.

Safety has not been examined in pregnant women and children and information is lacking.

Maitake benefits health because of the presence of beta-glucans and polysaccharides.

The varied beta-glucans in maitake have unique health benefits, however as a whole they are beneficial. Maitake D-fraction, MD-fraction and SX-fraction have all shown benefit.

It is important when purchasing maitake to choose a reputable brand that isolates for active ingredients. Stay away from brands that spruik their high polysaccharide content if you want anti-cancer activity.