Nootropics are drugs, supplements, or other substances that improve cognitive function. This guide will provide an overview of what nootropics are, how they work, and the potential benefits and risks associated with their use. 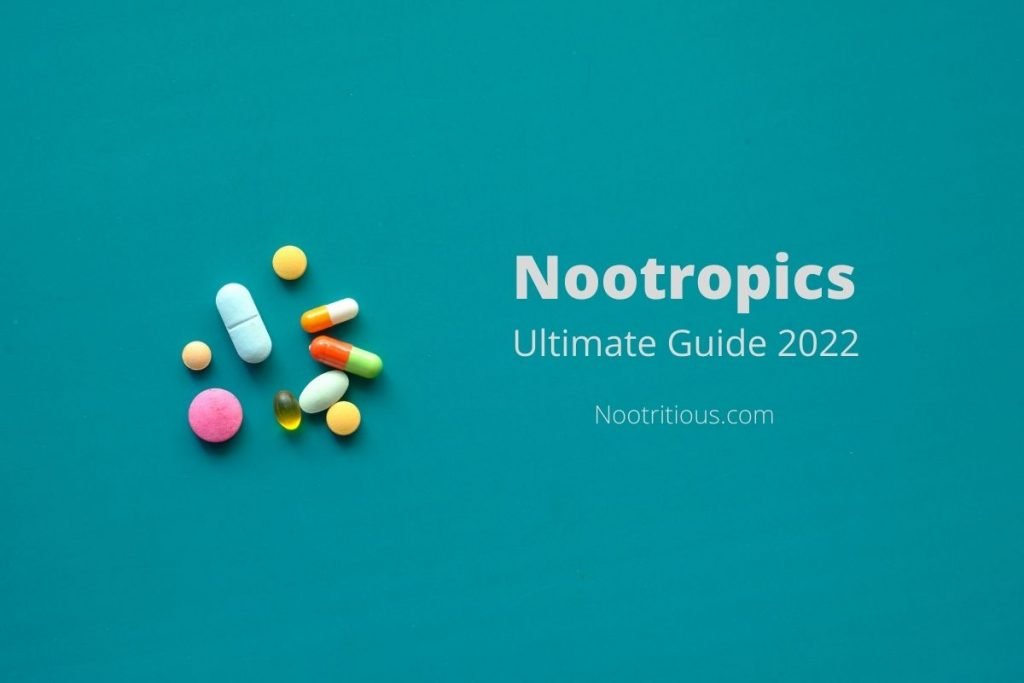 Nootropics are drugs or other substances that improve cognitive function, and they’re becoming increasingly popular as people look for ways to boost their brainpower. While there is some controversy surrounding nootropics, there is also a growing body of evidence suggesting that certain nootropics can be effective.

Nootropics are a relatively new class of drug, having only been developed in the last few decades. They are sometimes referred to as “smart drugs” or “cognitive enhancers” due to their ability to improve cognitive function. Whilst they were originally developed for therapeutic use, many people now use nootropics for non-medical purposes such as studying or working long hours. On this website, we draw a line between smart drugs and nootropics. We don’t recommend smart drugs including modafinil and Vyvanse due to their ability to induce dependency.

The general benefits of Nootropics include improved memory, focus, and concentration. Nootropics may also protect against age-related cognitive decline and improve mental clarity. They can improve memory, focus, and vigilance by increasing the levels of acetylcholine and norepinephrine. They can also protect the brain from damage caused by stress, aging, and alcohol consumption.

There is a great deal of debate surrounding nootropics because the industry is largely unregulated. This makes it difficult to identify which nootropics are safe and effective.

During our research process, we test nootropics ourselves to see if they live up to the claims made by the manufacturers. We don’t just take their word for it. We aim to provide you with accurate and unbiased information so that you can make an informed decision about which nootropics are right for you.

We offer advice on a range of topics related to nootropics, including:

We also provide reviews of popular nootropics, as well as interviews with experts in the field. If you’re looking for information on nootropics, this is the place to start.

When examining the scientific evidence, we always consider the long-term effects of nootropics on overall health. At Nootritious, we’re very interested in the science of longevity and the aging process.

We offer a free newsletter, which includes the latest research and our own experiences with nootropics.

Nootropics are a relatively new class of drug however they have become increasingly popular. There is growing evidence to suggest that they may be effective in improving cognitive and physical function in both children and adults. So the answer is, yes, nootropics do work but the real answer is complex as they work in varying ways for different people.

For example, Coenzyme Q10 can be beneficial in older people as the ability to synthesize Coenzyme Q10 falls with age, but it can have no perceived effect in young people who can produce it efficiently within their bodies.

What is the most effective nootropic?

This is a difficult question to answer as people may find one nootropic to be more effective than another. It’s important to remember that not everyone responds to nootropics in the same way.

One of the most well-known and widely studied nootropics is caffeine. Caffeine is a psychoactive substance that is found naturally in coffee, tea, and chocolate. It is also available as a dietary supplement. Many studies have shown that caffeine can improve memory, reaction time, vigilance, and attention span. Caffeine is a nootropic that has been shown in the scientific literature to have predictable benefits and drawbacks.

Another well-known nootropic is Adderall, which is a prescription medication used to treat attention deficit hyperactivity disorder (ADHD). Several studies have shown that Adderall can improve cognitive function in children and adults with ADHD. However, Adderall also has several potential side effects, including insomnia, anxiety, and depression. We would never recommend Adderall for this reason, instead suggesting alternatives.

The main takeaway is that the most effective nootropic doesn’t exist overall. It is important to note that nootropics are not a replacement for a good night’s sleep and a healthy diet. Additionally, the effects of nootropics vary from person to person. What works for one person may not work for another.

Nootropics are a relatively new class of substances and as such, the long-term risks and benefits over decades are not yet known. However, there is increasing evidence to suggest that nootropics may be effective and safe.

For example, racetams were originally developed in the 1970s to treat cognitive decline and dementia. A number of clinical trials have since shown that racetams are safe and effective in the long term.

Other nootropics including ginseng, maitake and magnesium are highly tolerated and safe. The nootropics reviewed on Nootritioius.com are safe, and we provide warnings when they can be potentially unsafe.

Are Nootropics good for the brain?

A nootropic by definition improves the functioning of the brain. Typically this is in the short term, however certain nootropics can preserve brain health as you age. Some nootropics may improve memory, focus, and concentration by increasing the levels of acetylcholine and norepinephrine. Additionally, they can also protect the brain from damage caused by stress, aging, and alcohol consumption.

These nootropics work by reducing levels of oxidative stress and by other mechanisms.

Where to Buy Nootropics?

This site contains affiliate links to products and services we recommend. We may receive a commission for purchases made through these affiliate links. However, this does not impact our reviews. We only suggest products we’ve also used, in order to help you make the best choices.

On this website, we link to products that we have personally tested and use. We evaluate nootropics according to value, effectiveness, and scientific proof. Before purchasing any nootropic, it is important to consult with a medical practitioner to ensure safety and efficacy.

Reputable brands selling Nootropics should be third-party tested for quality and purity. Reputable companies will often have Certificates of Analysis (COAs) available on their website. These COAs show that the products have been independently tested.

We are partnered with iHerb who stock a wide variety of products. They also sell independently tested products.

Who benefits from nootropics?

Everyone can benefit from nootropics.

Healthy people can take nootropics for a host of benefits including:

Whilst not officially considered nootropics, certain compounds can improve physical recovery for athletes. We cover those here at Nootritious.

And Citicoline is a nootropic that can improve physical recovery by reducing inflammation and promoting nerve growth. Citicoline is also effective in cognitively demanding tasks.

The official definition of a nootropic ensures that it is both safe and non-addictive. Certain nootropics are beneficial even after stopping use.

Certain smart drugs including modafinil and Vyvanse can lead to dependency, and therefore we don’t recommend them here at Nootritious.

In general, Nootropics have very few side effects, are safe at the recommended dose, and do not cause withdrawal symptoms.