Your body creates small amounts of Alpha-GPC on its own.

Around 40% of Alpha-GPC is choline, which your body needs to produce acetylcholine, an important neurotransmitter that affects mood, muscle function and memory.

Choline is essential but your body cannot produce enough to meet the amount needed for optimal health [1].

Because your body can’t make enough choline, you must obtain it through your diet or supplementation. For people with folate deficiency, the need for dietary choline is higher as folate and choline metabolism are linked.

How does the brain age?

The brain is responsible for managing organ function and maintaining whole body metabolism.

As a result, the brain demands an extremely high energy consumption and rate of metabolism that can lead to an accumulation of errors [2].

Like a car that has been driven for too long, your brain needs regular servicing.

These defects in the mitochondria may lead to neurodegenerative and metabolic disease.

To clear these errors that can result in oxidative stress, the mitochondria employs certain mechanisms or ‘chaperones’.

These chaperones help to maintain a low steady-state level of misfolded proteins.

In those with type 2 diabetes and Alzheimers or Parkinson’s disease, chaperone function is impaired [3][4].

These chaperones shift and refold the misfolded proteins; without them, we become susceptible to neurodegenerative disease.

Proponents of Alpha-GPC have long used it for the purported physical benefits.

The literature has shown that Alpha-GPC can increase the release of the neurotransmitter acetylcholine which facilitates learning and memory – however the physical benefits are becoming increasingly evident in studies.

In a double-blind randomised controlled trial, 200mg of Alpha-GPC led to an 8% increase in vertical jump power.

Interestingly, a 400mg dose led to a reduced increase in vertical jump power. This means that there is an optimal dose – likely related to weight.

Alpha-GPC led to a far greater increase in peak power in comparison to caffeine, which had a 2.0% increase compared to placebo [5].

In young healthy men, Alpha-GPC has been found to improve lower-body strength in 6 days of supplementation [6].

In the elderly, progressive cognitive decline is a major issue that lowers life quality.

Those with Alzheimers, stroke and MS have impaired mitochondrial citric acid cycles.

Mitochondrial dysfunction plays an important role in neurodegeneration and aging.

Alpha-GPC has been shown to conserve growth factor receptors and maintain neuron health in the brain [9].

Other compounds implicated in mitochondrial metabolism include the B vitamin group, vitamins E and K, alpha-lipoic acid, CoQ10 and nicotinamide adenine dinucleotide (NADH).

The trophic nutrients acetyl L-carnitine, alpha-GPC and phosphatidylserine provide mitochondrial support and have led to improved cognition in double-blind trials [9].

Alzheimer’s symptoms are possibly reduced through Alpha-GPC supplementation as Alpha-GPC can impair the function of acetylcholinesterase, an enzyme responsible for breaking down acetylcholine.

And acetylcholine is a powerful neurotransmitter required for our brain health and declines as you age.

In one clinical trial, supplementation of 400 mg, three times a day for 180 days led to cognitive gains in dementia patients [11].

It appears these benefits were seen in those with stroke and Alzheimer’s.

Therefore, these trials suggest that Alpha-GPC may aid functional recovery for those with stroke and dementia.

Alpha-GPC is possibly safe at doses of up to 1200mg per day.

This level of dosage has been shown to consistently benefit cognition.

Lower dosages can also benefit, but 1,200 mg is the typical dose used in studies.

Using Alpha-GPC for strength benefits, the typical dose is 400-600 mg before activity (around 90 minutes prior).

Citicoline (CDP-Choline) is a similar compound to Alpha-GPC that comes in capsule form.

Many powder forms are sold in concentrations of 50% or 99% Alpha-GPC.

As Alpha-GPC is hydroscopic, meaning it absorbs moisture from the air around it – it needs to be left in a cool, dark place. In our experience, the hassle of dealing with powder is not worth the trade-off and a large percentage of the powder is rendered unusable. Usually the powder begins to clump with small levels of humidity, however powder is feasible if you live in a dry climate.

Alpha-GPC is relatively higher priced than other nootropics but it has proven to be worth the price.

For a cheaper option that is also beneficial, try citicoline.

Preliminary studies indicate that Alpha-GPC has tremendous benefits for vertical jump power, bench press max and lower body strength in healthy young men. These benefits were evident as soon as 2 hours after first ingesting Alpha-GPC. Compared to caffeine, alpha-gpc had a greater increase in peak power, however caffeine may be more beneficial for cardiovascular endurance.

Onnit Alpha Brain is a popular supplement however it contains many different types of nootropics – therefore we don’t recommend it to neurohacking beginners. 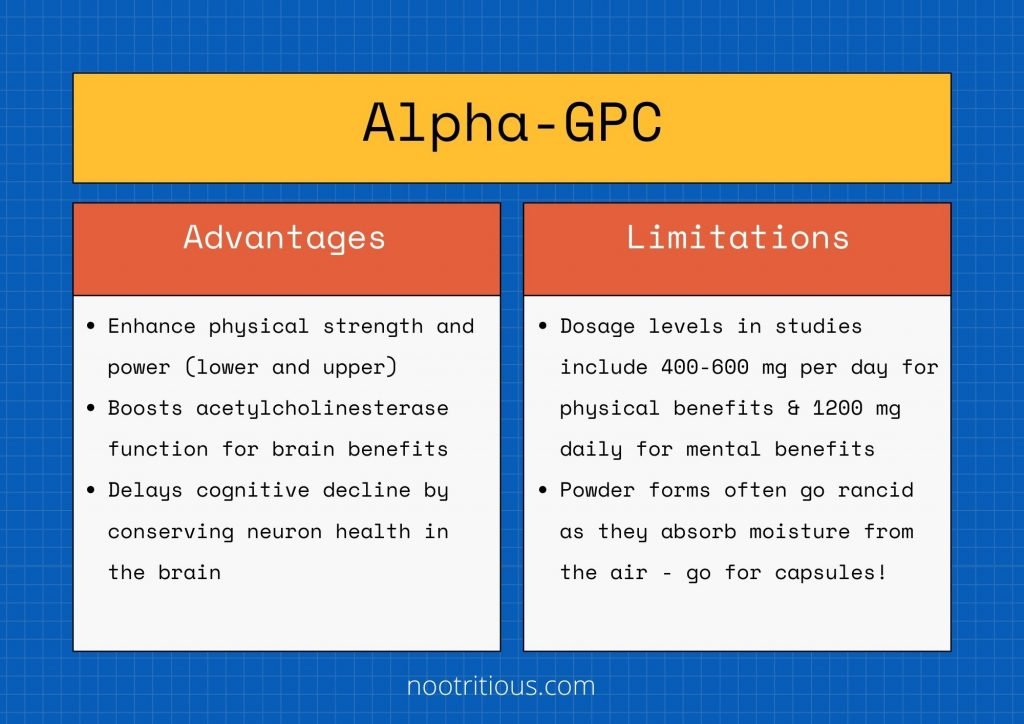 Alpha-GPC can be beneficial due to its positive effects on our brain health.

However more evidence is needed for its strength benefits and it is possible that other forms of choline including citicoline can induce similar strength effects.

Older adults may want to supplement as Alpha-GPC can slow cognitive decline associated with aging.

Alpha-GPC is safe at dosages of up to 1,200 mg per day however this is on the higher end.