Bacopa Monnieri: Benefits and Side Effects 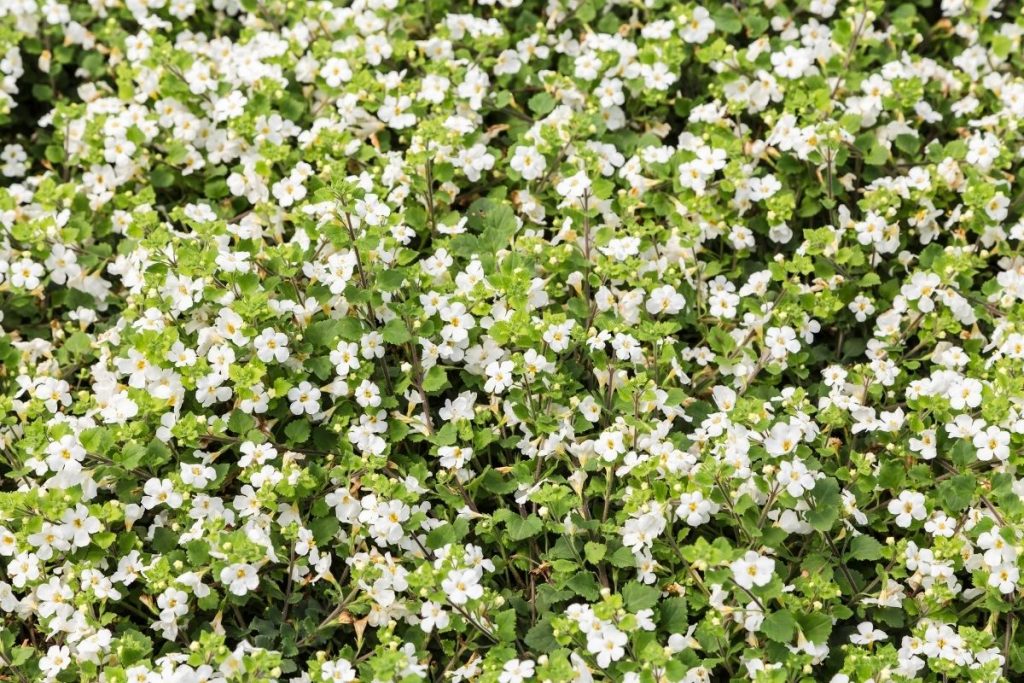 Bacopa Monnieri is an ayurvedic herb native to Australia. It is commonly used for its medicinal properties which work by free radical scavenging and acetylcholine stimulation.

Supplementation can evidently improve longevity and cognition in humans. There is strong evidence that Bacopa possibly improves working memory function [1].

The benefits of Bacopa are not limited to mental performance only, as ecdysterone found in Bacopa monnieri has been shown to be more effective at improving muscle mass and reducing body fat than many banned anabolic substances such as methadienone amongst others.

Bacopa is generally well tolerated but should be dosed according to the active ingredient (Bacoside A) levels which differ between brands.

This site contains affiliate links to products and services we recommend. We may receive a commission for purchases made through these affiliate links. However, this does not affect our reviews. We only suggest products we’ve reviewed and use, in order to help you make the best choices. 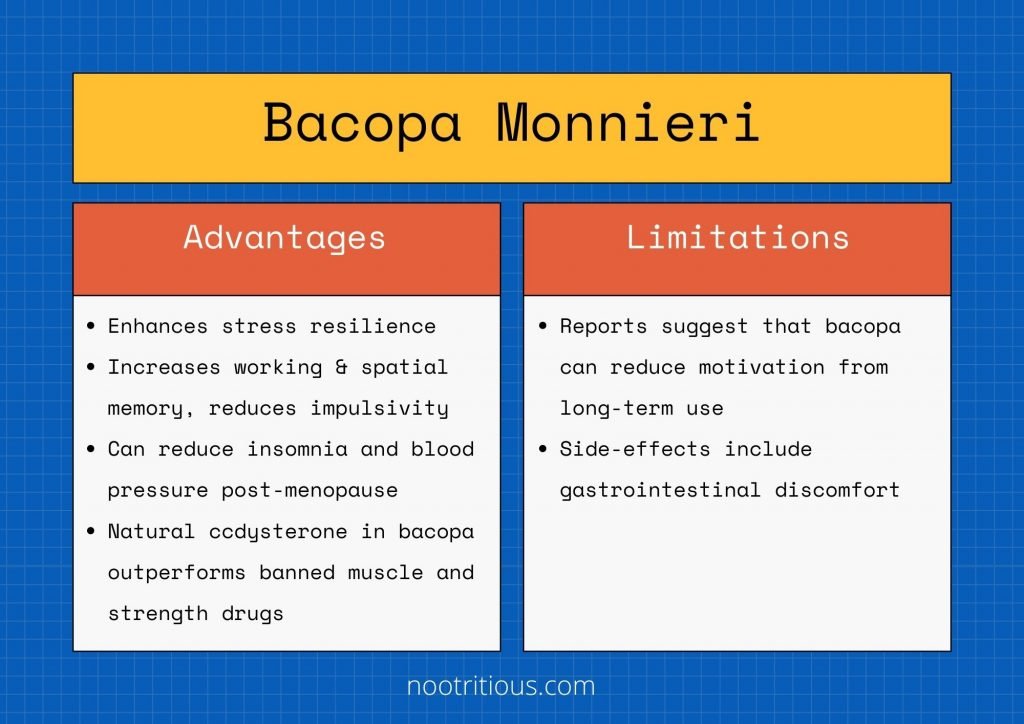 Bacopa Monnieri is one of the most promising nootropics for memory and reducing stress. This ayurvedic herb can form the basis of any nootropics stack for memory, strength and mood. In combination with other nootropics including ALCAR and Ashwagandha, it is useful for inattention and focus.

Bacopa monnieri works via a number of mechanisms, These include:

Bacopa Monnieri can boost our mood due to the stimulation of GABA/serotonin production in the hippocampus. The neurotransmitter GABA is responsible for stopping nerve impulses, which lowers stress. As an important neurotransmitter, serotonin regulates our mood and sleep. The hippocampus is the area of the brain responsbile for our emotions and memory, and bacopa monnieri is thought to affect this.

Benefits of Bacopa monnieri include:

1. Prepares you for stressful situations

Bacopa monnieri dissolved in distilled water at doses of 20 to 40 mg/kg appeared to reduce activity of stress related enzymes and improve the expression of stress managing compounds such as Hsp70, P450 and SOD [4].

Superoxide dismutase (SOD) helps prevent damage to your cells and protect your brain by converting harmful toxins into harmless compounds. When stressed, you produce higher levels of Hsp70, a heat shock protein. Taking Bacopa beforehand can prime you to handle stressful events in the near future.

Aside from reducing stress and symptoms of depression, supplementing Bacopa monnieri may improve your mood by decreasing cortisol [5].

Aging reduces the efficiency of the brain to scavenge free radicals and severe oxidative damage is highly neurotoxic.

Supplementing Bacopa monnieri can be a simple intervention to ameliorate oxidative damage in the brain and age-related mental decline because when taken with fat source, bacopa is able to reach the brain [6].

In this way, Bacopa can slow the inevitable age-related neuroinflammation – by reducing oxidation [7].

This type of memory is what you use when multitasking, or remembering multiple things.

A study found that effects from Bacopa supplementation were observed in the 1-2 hours after consumption [6].

This is promising for those requiring an immediate boost.

In both groups, participants performance in a multitasting framework task improved significantly after taking 320 mg of Bacopa and 640 mg.

A meta-analysis of 9 studies and 518 subjects on the cognitive effects of Bacopa monnieri concluded that attention and memory function are possibly improved with supplementation [9]. However further research is needed.

Post-menopause reductions in estrogen lead to gradual shrinking of the hippocampus region. Bacopa monnieri appears to have a brain-protective effect that prevents this shrinkage [11] [12].

Cognitive function and impulse control were improved in 120 children with ADHD given Bacopa monnieri for four months [13]. Attention in children improved substantially.

In children, Bacopa at dosages of 225 mg/daily is safe.

Long-term Bacopa has been found to reduce interleukin-6 and tumor necrosis factor -alpha, both inflammatory cytokine that increase neuroinflammation as we age [12].

Further decreases in total nitrite and lipofuscin content were observed, suggesting that Bacopa may be a useful neuroprotective agent [12].

This reduction in inflammation may be responsbile for Bacopa’s role in helping reduce epilepsy symptoms [15]. Bacopa and Bacoside-A appear to reduce the impairment associated with epilepsy due to increased activity in the muscle and decreased acetylcholine esterase activity in the heart [16].

Ecdysterone found in bacopa has been purported to increase protein synthesis rates without any adverse side effects.

A natural plant steroid, ecdysterone has been studied in strength training athletes and found to decrease body fat levels and increase muscle [19][20].

This has led some researchers to suggest the classification of ecdysterone into a prohibited substance due to its role as an anabolic agent.

In comparison to currently prohibited substances such as methadienone in rats, edysterone was superior to these compounds.

Daily dosages of 225 mg are likely tolerated in children. This correlatees to around 2.5g in dry weight of Bacopa.

In adults, dosages of 625 mg are likely safe.

Long-term studies of toxicity in humans are yet to be produced.

Most studies focus on studying Bacoside A, although there exist further bacosides they are not understood.

The active ingredient in Bacopa monnieri (Bacosides A and B) are what determines the dose. Bacosides A is composed of saponins bacoside A3, bacopaside II and jujubogenin isomer of bacopasaponin C and should be taken with a fatty meal.

The most common side effect is mild gastrointestinal discomfort although long-term use is not well understood.

The safety profile of Bacopa monnieri is unclear, but doses of around 200-500mg have been widely used with no side effect.

Pregnant women should avoid Bacopa as there is insufficient evidence surrounding its use in this demographic. This is because studies are often not available with pregnant subjects.

Bacopa is fat-soluble and should be taken with a healthy fat source.

There’s growing evidence that Bacopa monnieri supplementation can treat those suffering from impulsivity, memory issues and attention. For post menopause, Bacopa can prevent insomnia. For older adults, Bacopa has numerous benefits for longevity and cognition.

Dave UP, Dingankar SR, Saxena VS, et al. An open-label study to elucidate the effects of standardized Bacopa monnieri extract in the management of symptoms of attention-deficit hyperactivity disorder in children. Adv Mind Body Med. 2014;28(2):10-15.