CDP-Choline: Benefits, Side Effects and More 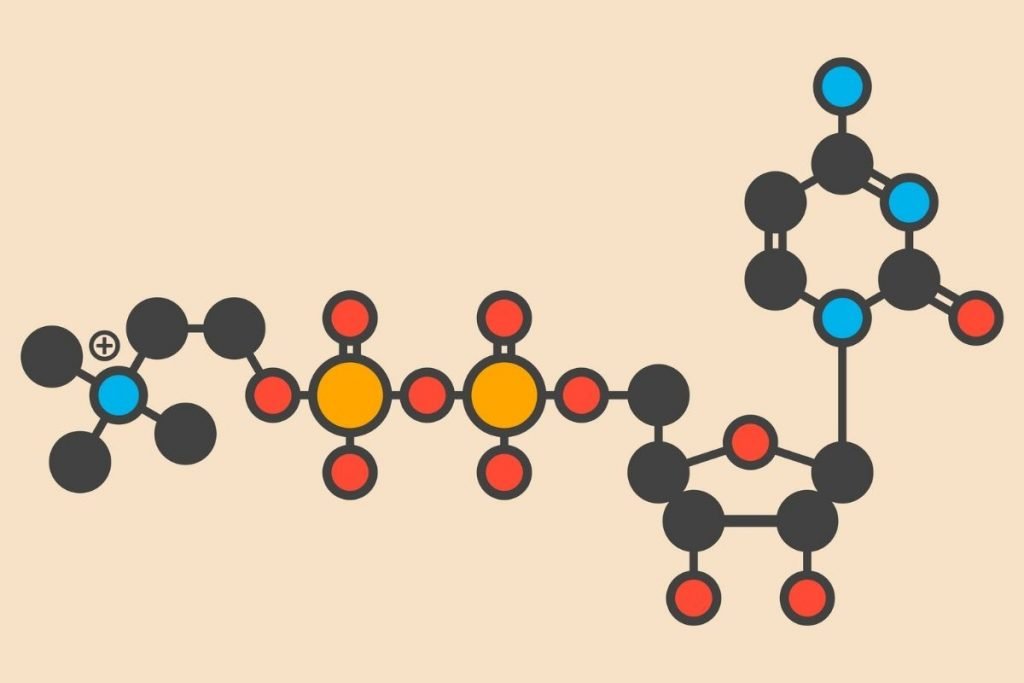 CDP-Choline is a nootropic that helps to maintain cognitive health and improve mental performance.

CDP-choline and citicoline are identical in structure and refer to the same compound.

However citicoline is the name when it is ingested, or when it is taken as a medication.

CDP-Choline refers to the molecule that is produced by the body [x]. 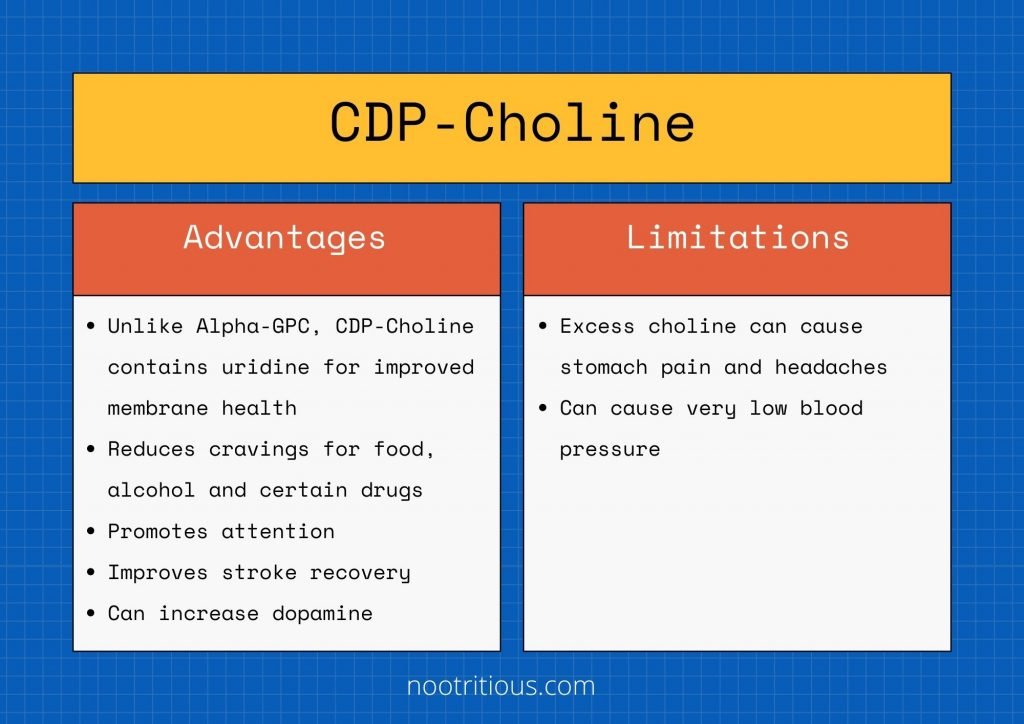 CDP-Choline or Citicoline is also known by its brand name Cognizin.

When to take: Take during meals anytime in the day. CDP-Choline is not a stimulant so it has limited effect on sleep/wake cycles.

How much to take:

Focus: 250-500 mg has been shown to lead to improved focus and mental clarity

Phosphatidylcholine makes up part of your neuron’s cell membrane and is formed from uridine which is metabolised via cytidine in your body [1].

CDP-Choline has been shown to treat memory degeneration associated with aging by boosting neuroprotective molecules in your brain that repair neurons.

Alpha-GPC and CDP-choline both provide choline and therefore have similar health benefits. However Alpha-GPC contains no uridine which is necessary to synthesise phosphatidylcholine and is also responsible for cell membrane health.  In the latest research, CDP-Choline further differs from Alpha-GPC as it has been linked to Sirtuin1 expression which has ramifications for our longevity [2][3].

CDP-Choline may lead to reduced cravings. In healthy persons, 2000mg of CDP-Choline taken for 6 weeks led to a 27% reduction in appetite however this did not result in weight loss [4].

The mechanism underlying this appears to be due to increased activity in the amygdala, insula and lateral orbitofrontal cortex in response to food cues. However it is not well understood and is merely a correlated effect.

2. May promote attention and performance

CDP-Choline can result in improved performance when undergoing a cognitive task.

In healthy women aged 40-60 given CDP-choline of 250-500mg for 28 days, supplementation at 250mg and 500mg was able to reduce errors in a continual performance test.

Whilst all doses were effective,  250mg appeared to be marginally more beneficial for cognition [8].

All the studies of CDP-Choline supplementation examining pain sensitivity use injections as a delivery method.

However, it is LIKELY that oral supplementation of choline can similarly reduce pain sensitivity.

The effects on pain tolerance are secondarily increased in response to activation of the nicotinic receptors.

4. Boosts acetylcholine in the brain

A deficiency in this neurotransmitter has been correlated with increased risk of Alzheimer’s, dementia, Parkinson’s and MS.

Due to CDP-Choline containing both choline and uridine, it boosts acetylcholine via two pathways.

As choline is a building block of acetylcholine, CDP-choline can boost choline levels in the brain through a primary pathway [9]. In animal studies injections of CDP-Choline have shown increases in extracellular acetylcholine at doses of 100mg/kg [10].

CDP-Choline may help to maintain brain stability and health. This is especially true in those with damaged brain function.

CDP-Choline taken at the onset of stroke is able to confer protective effects by reducing the size of infarction, stimulate growth factors and SIRT1 [12][2].

CDP-Choline has been shown to confer protective benefits to the brain in the form of memory preservation following stroke [10].

However the evidence is mixed. In people with traumatic brain injury, who were placed on CDP-Choline for 90 days, there was no cognitive or functional benefit.

CDP-Choline led to an increase in phosphocreatine concentrations at dosages of 500mg [13]. Adequate levels of Phosphocreatine are necessary to maintain ATP levels in the brain. Following brain trauma, phosphocreatine levels fall, along with magnesium and high energy phosphates.

Glaucoma is the name given to a group of eye diseases where damage to the optic nerve results in vision loss or impairment. Those suffering from glaucoma have symptoms of a loss of peripheral or side vision, seeing halos around bright objects or lights, and vision loss.

In those suffering from glaucoma, CDP-Choline appears to be somewhat protective of vision and has been linked to improvements in visual acuity [14].

The mechanism for this improvement is not due to changing eye pressure, as CDP-Choline has no effect on intraocular pressure [15][16].

CDP-Choline can boost our levels of dopamine significantly.

The reason for this is likely due to the uridine present in CDP-choline [17]. This results in increased levels of dopamine transporter and by therefore the amount of dopamine released from neurons.

In those with neurological damage, CDP-Choline confers neuroprotective benefits as it ameliorates declines in dopamine secretion. The benefits are more related to the uridine component of CDP-Choline rather than the choline component.

Those taking Alpha-GPC can benefit from supplementing CDP-Choline, as uridine is not present in Alpha-GPC.

The dietary sources of choline include:

Side effects are rare but manifest as nausea, vomiting, headaches and stomach upset.

These side effects are rare however you should consult your healthcare provider prior to supplementation or if you experience issues.

The benefits for attention enhancement exclusively or more strongly correlates to the lower dosage of 400-2000 mg.

CDP-Choline is sold in tablet form.

Typical single doses are 250-500mg. This would mean 1-2 tablets a day to meet the recommended dose.

Cognizin is a patented form of CDP-Choline that is highly recommended.

When purchasing, check the ingredients list to determine if Cognizin is present.

CDP-Choline has tremendous benefits for our brain.

Boosting dopamine, improving celullar health and exerting physical benefits, CDP-Choline is recommended for those looking to improve their mood and exercise performance.

CDP-Choline is relatively inexpensive and is highly promising for head trauma, bodily health and general cognition.