Huperzine A: Benefits, Dosage, and Side Effects

Huperzine A is a chemical that is derived from Chinese club moss (Huperzia serrata) that acts as a cholinesterase inhibitor. People use Huperzine A to improve memory and concentration and it has been used since the 1980s for this purpose. The anecdotal benefits of Huperzine A are perceived as enhanced fluid intelligence and increased ability to grasp concepts. 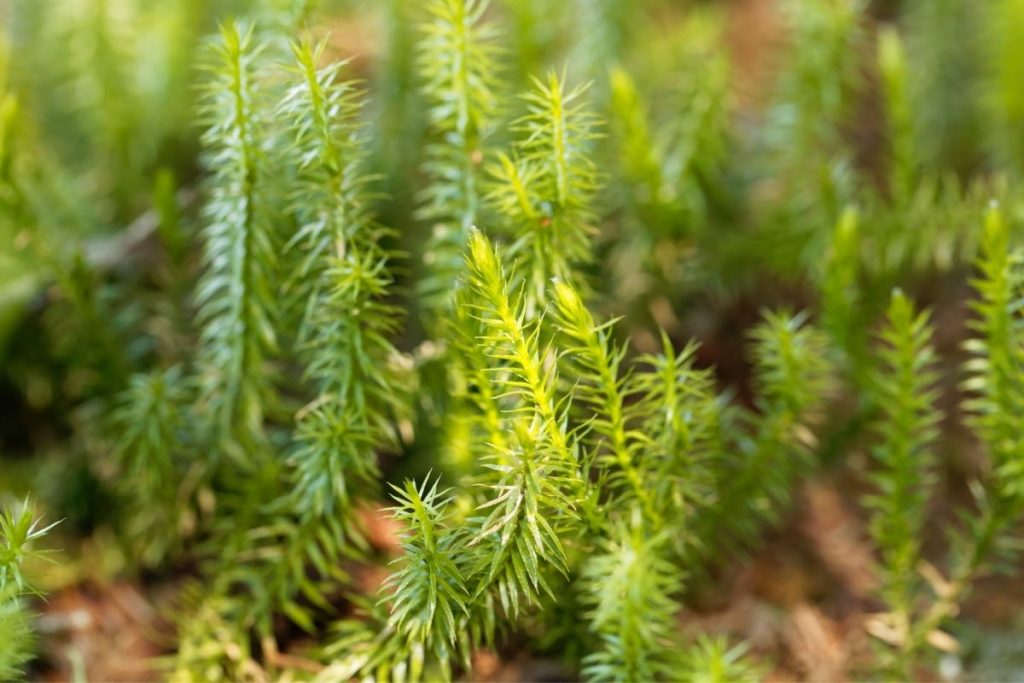 Huperzine A is a chemical compound that is derived from the Chinese club moss plant (Huperzia serrata). It is also known as Qian Ceng Ta. Huperzine A has been used for centuries in traditional Chinese medicine, and more recently, it has been studied for its potential benefits on cognitive function.

Huperzine A works by inhibiting the enzyme acetylcholinesterase, which is responsible for breaking down the neurotransmitter acetylcholine. In doing so, it increases levels of acetylcholine in the brain, which has been associated with improved memory and cognitive function. It has a high inhibitory affinity for acetylcholinesterase which results in a long half-life [1][2].

Huperzine A is superior to other acetylcholinesterase inhibitors because HupA specifically inhibits Acetylcholinesterase G4, a physiologically important form at cholinergic synapses [3]. HupA can also restore choline acetyltransferase function in cocaine addicts. HupA can cross the blood-brain barrier easier than other drugs that work the same way.

Overall, huperzine A works in a number of way, by attenuating oxidative stress, regulating apototic proteins and by interfering with amyloid precursor protein metabolism [4][5][6][7].

Huperzine A also works as an NMDA and glutamate receptor antagonist. By blocking NMDA ion channels without any psychotomimetic effects, Huperzine A may enhance cognitive protection in cases of ischemia and Alzheimer’s disease [8].

The hippocampus is the part of the brain that is responsible for memory formation. Huperzine A has been shown to increase levels of neural stem cells (NSC) in the hippocampus, which may help to enhance cognitive function [8]. Huperzine A promoted hippocampal neurogenesis, in vivo and in vitro. This results in improved memory.

In the prefrontal cortex, Huperzine A increased dopamine by 112% [9].

The benefits are mostly found in animal studies, so despite their promise we’d like to see more evidence in humans before recommending Huperzine A.

Phase IV clinical trials have shown that Huperzine A can significantly improve memory in elderly people with typical forgetfulness [10].

In high school students, Huperzine A led to improved test scores after 4 weeks of .1 mg/day supplementation [11].

The dose was split into two 0.05 mg tablets.

2. May reduce symptoms of Dementia

Huperzine A may reduce inflammation and brain cell death resulting from Alzheimer’s disease [12]. It does so by protecting against beta amyloid build-up. This study was performed on animals.

Huperzine A is attracting more interest from the West, where Alzheimers incidence is increasing. A clinical trial of patients with Alzheimer’s disease found that huperzine A was able to improve quality of life without any unexpected toxicity [13]. Huperzine A has been shown in animal studies to protect against organophosphates and reduces glutamate induced toxicity.

In Alzheimer’s disease patients, cognitive enhancement did not occur at a dose of 0.2 mg, but did occur at 0.4mg [14]. This is a high dose, however it suggests that huperzine can be tolerated at doses of 400 mcg for 24 weeks.

Due to its effect as an acetylcholinesterase inhibitor, Huperzine A increases the level of acetylcholine. This increases dopamine release in your brain and can block cocaine addicting pathways [15][16].

A double-blind placebo-controlled study examined the effect of Huperzine A on cocaine dependent individuals and suggests that huperzine A may be a safe way to reduce cocaine addiction [17]. This was an initial study however it repeats similar findings in animals where huperzine-a like compounds (acetylcholinesterase inhibitors) blocked cocaine self-administration in monkeys and reduced addiction in rats and mice [18][19][20][21].

The acetylcholine levels in the brain are highest when taking huperzine a compared to acetylcholinesterase inhibitors donepezil, rivastigmine and tacrine.

Compared to these acetylcholinesterase inhibitors, huperzine A better penetrates the blood-brain barrier and has better bioavailability which prolongs acetylcholine release [22].

This can induce a sense of calm energy.

The benefits for mood are typically hit or miss, however anecdotal benefits indicate a lifted mood. Mood benefits may be the result of increased energy and clarity. Prefrontal cortex levels of norepinephrine are increased from supplementation.

For those who are undertaking a stressful mental task, taking this may lead to an improved mood.

Myasthenia gravis is an autoimmune disorder that manifests as weakness, double vision and trouble chewing. This disease works by injuring acetylcholine receptors leading to a lack of voluntary movement control. Huperzine A may restore muscle strength in Myasthenia gravis patients and has been used in place of mestinon in cases with less side effect.

Anecdotal benefits suggest that huperzine A outperforms mestinon for treating double vision. Furthermore, it can improve muscular strength without any rollercoaster effect. After a few months however, huperzine A can become ineffective so a break is required before resuming dosage.

As these are anecdotal reports, further research is required despite promising claims.

Side effects are rare but may include nausea, vomiting, diarrhea, sweating, and blurred vision. If you experience any adverse effects, stop taking the supplement and consult your doctor immediately. Cholinergic symptoms can include decreased heart rate, headache and nausea.

Anecdotally, there have been reports of lucid dreaming at doses above 100 mg.

The typical dose is in the range of 50-200 mcg per day, usually taken in one dose. Huperzine A can be taken without food as it is water soluble.

For learning and memory, 0.1 mg has led to improvements in high school students.

In clinical trials for Alzheimers, dosages have ranged from 0.2 to 0.8 mg.

A Huperzine A cycle lasts around 2-4 weeks. Optimal length of break from cycle is not known. It is better to err on the side of caution as Huperzine A can be potent.

The Best Huperzine A Supplements 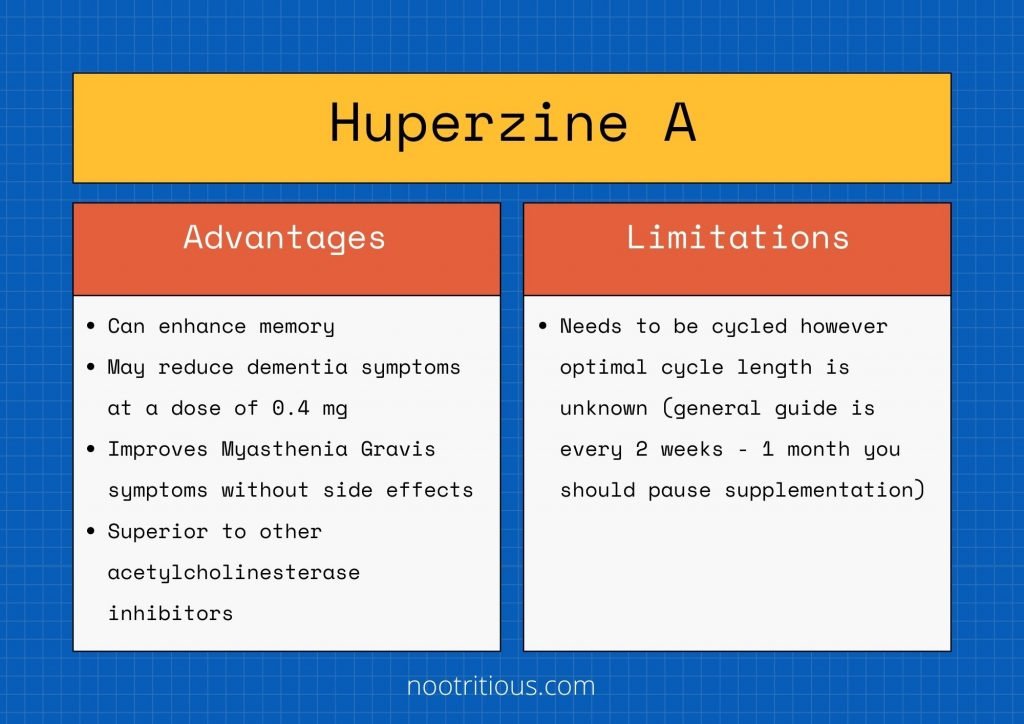 Huperzine A is a potent nootropic that purports to improve focus, memory and energy however the evidence is mixed.

It is necessary to cycle Huperzine A as you can become tolerant over time.

Huperzine A may have benefits for myasthenia gravis that require further research.