Magnesium is involved in hundreds of pathways in the human body.

These include a diverse number of biochemical reactions to maintain muscle and nerve function, blood pressure control and protein synthesis.

A lack of magnesium can result in mental numbing, irritability and tiredness.

Both your brain and body needs adequate magnesium to ensure optimal health.

It has been of increasing importance to address this deficiency, as magnesium has been implicated in hundreds of enzymatic reactions as well as the activation of our neural plasticity. 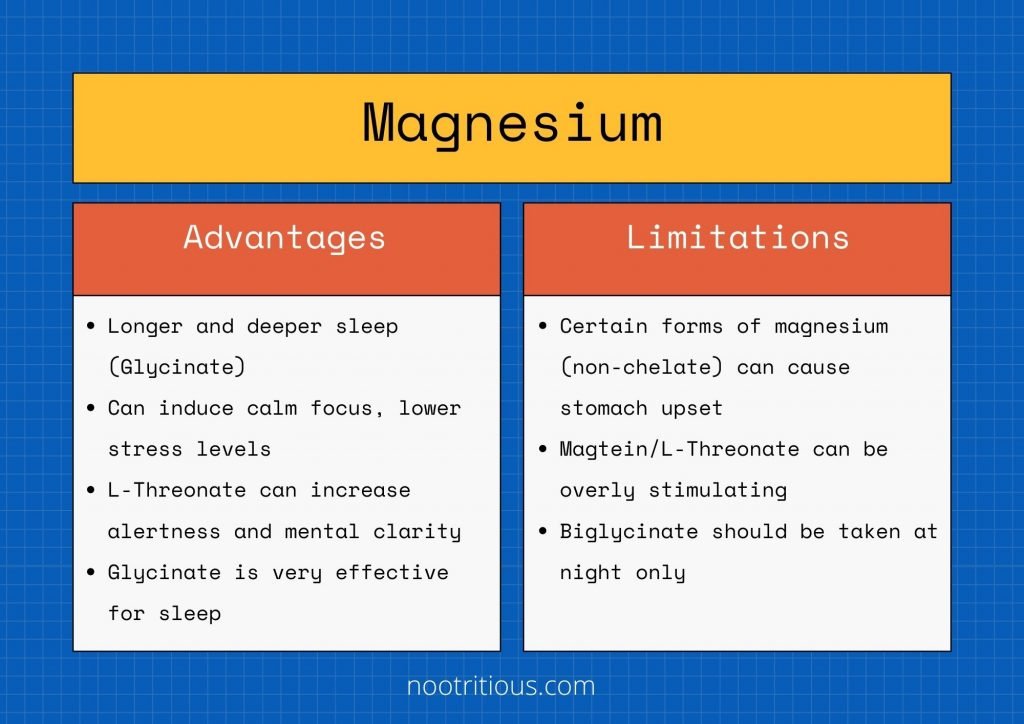 The perception of each supplement is weighted according to the relative magnitude of the effect. This is not scientific advice, rather a combination of our personal experiences and other user reports. Usually when taking a nootropic there is a certain prevailing feeling such as improved focus or mood but secondary effects that are less subtle are also present.

Anecdotally, magnesium glycinate which is the same as magnesium bisglycinate enhances sleep quality and reduces stress. Chronic stress depletes magnesium and magnesium diminishes the stress response mediated by catecholamines and other stimulants leading to a calm feeling. Secondarily, this may have smaller effects on mood, energy and focus. Most forms of magnesium will have similar effects to magnesium glycinate, although glycinate is better for sleep. 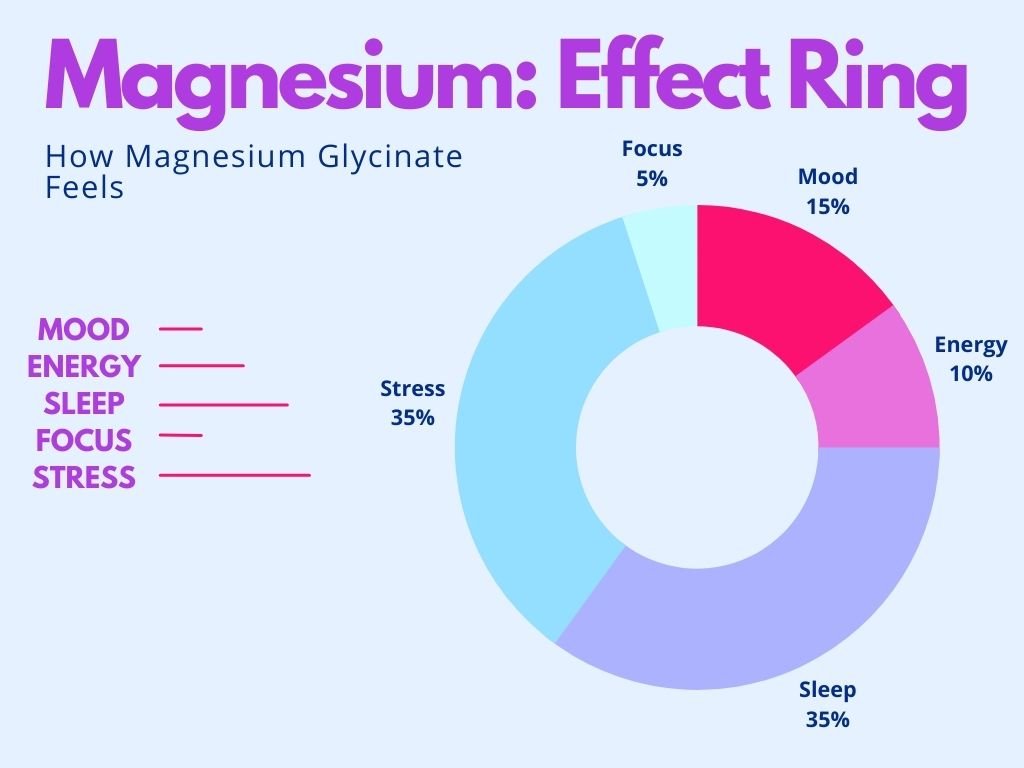 This version of magnesium passes through the blood-brain barrier. Anecdotally, taking this led to improved memory, faster mental calculations and task processing. It’s effects are very distinct from other forms of magnesium that typically result in relaxation. When taking this form of magnesium, the feelings of focus were overpowering other perceptions. 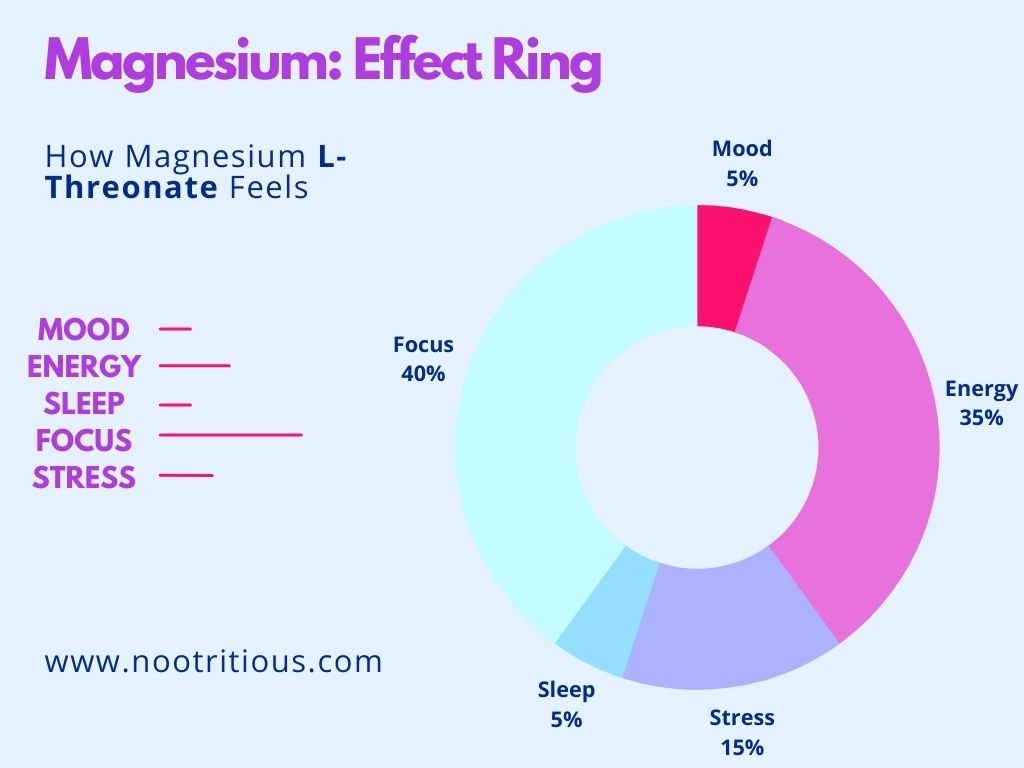 Magnesium is widely available however it can be difficult to decide which form is the best.

There are many different forms of magnesium – each differing slightly.

For example, you may have heard of magnesium chelate – but what is it?

Magnesium chelate is elemental magnesium that is merged with an organic or amino acid.

The reason why magnesium is chelated is for absorption efficiency.

The chelated forms of magnesium are generally well-tolerated without a strong laxative effect, and is absorbed better in your gut.

In general, chelated forms are used to address deficiencies or for their brain-boosting effects.

Whilst salt forms are used for their effects on constipation.

The problem with salt forms is they are poorly absorbed thus causing osmotic diarrhea when people are using them for other reasons.

We don’t recommend this form of magnesium for brain benefits.

Your body can make glycine but it is also present in meats, fish and beans.

Magnesium Orotate: Orotic acid is involved in the regulation of genes that are important in the development of cells, tissues and organisms [5].

Magnesium orotate has been used by athletes for its purported heart health benefits, however it is beneficial in many other respects for health [6].

Magnesium L-Threonate: This form of magnesium has shown promising results for memory as it readily crosses the blood-brain barrier. If you are looking for mental benefit, this is the one to take.

It is formed by mixing magnesium with threonic acid, which is derived from ascorbic acid, or vitamin C [10].

Magnesium Citrate: Magnesium citrate is magnesium that is bound with citric acid and is commonly used to treat constipation.

Citrate is well-tolerated as it is a chelated magnesium.

As magnesium citrate is a common form of magnesium supplement, it is widely available.

It is versatile as it can be used to treat magnesium deficiency.

Citric acid is often used as to preserve and enhance foods.

Lactic acid is what your muscle and blood cells produce when oxygen levels in your body fall.

This form of magnesium is often used as it is gently tolerated compared to magnesium oxide.

Magnesium Chloride: Magnesium chloride is well absorbed in the gut.

It is often used to improve gastrointestinal issues, reduce blood pressure and help with type 2 diabetes.

Magnesium Malate: Magnesium malate is strongly absorbed in the gastrointestinal tract so it is used to restore magnesium levels [11].

Magnesium malate acts as an antacid, and can be used to treat heartburn.

It is a gentle source of magnesium that can promote regular bowel movements.

Magnesium malate is a combination of magnesium and malic acid.

This form of magnesium has cardioprotective and hypertension mitigating effects [12].

Magnesium Sulfate  (Also known as epsom salt): Magnesium sulfate has often been used to soothe muscles when dissolved in solution.

It can be taken as a drink when mixed with water.

However, there is no evidence that magnesium is absorbed through the skin at high levels.

Magnesium Oxide: Magnesium oxide is a salt that consists of oxygen and magnesium.

Typically, it is used to treat constipation and heartburn and it is poorly absorbed. [13].

Magnesium oxide supplements contain high dosages to make up for poor absorption and due to poor bioavailability, this may lead to a laxative effect.

This form of magnesium is not recommended for treating deficiencies and is largely used for its laxative effect.

Migraine headaches are painful and debilitating.

Typically, migraines are accompanied with symptoms of nausea, vomiting and sensitivity to light.

Magnesium has been suggested by researchers to improve symptoms of migraines [14][15]. Researchers suggest that deficits in migraine are directly related to the pathogenesis of migraine. Migraine sufferers have low levels in their blood and cerebrospinal fluid.

A number of studies have found that supplementing magnesium can help treat migraine symptoms [16][17].

A meta-analysis of migraine patients found that oral magnesium resulted in reduced acute migraine attacks, in intensity and frequency of migraine [18].

The cortical blood flow in the frontal, temporal and insular regions increased after magnesium treatment compared to placebo.

It is hypothesised that this increase in blood flow may be responsible for the reduction in migraine intensity and frequency.

For those suffering from the debilitating effects of migraines, eating a magnesium rich diet containing leafy greens, dark chocolate and beans or taking a supplement can reduce symptoms. Supplementing using magnesium l-threonate or other chelated forms can be effective and easier as they can cross the blood-brain barrier.

A magnesium deficiency can worsen insulin resistance, which can have serious health implications.

Insulin resistance is associated with a host of health problems including diabetes, obesity, high blood pressure and high cholesterol.

In those with normal insulin sensitivity, after eating a meal containing carbohydrates, blood sugar levels rise and insulin works to transport this blood sugar to cells. Those with insulin resistance fail to transport glucose from the bloodstream to cells for energy.

Benefits were observed with supplementation of various forms of magnesium including magnesium chloride, magnesium orotate, magnesium oxide and magnesium-aspartate hydrochloride [20][21][22].

3. May improve markers of depression

One double-blind study found that supplementing magnesium oxide led to improvements in magnesium levels which may have secondarily improved depressive status [23].

4. Can help with exercise performance

Magnesium is important for our cardiovascular health and has increased importance for those who are active [22].

This is because exercise depletes magnesium levels which need to be replenished. Athletes are often at risk of magnesium deficiency, especially endurance athletes.

Supplementing magnesium appears to maintain performance with a reduction in stress response to exercise.

This indicates a lower level of inflammation in response to exercise, improving recovery.

5. Can help those with Type 2 Diabetes

Individuals suffering from type 2 diabetes may benefit from magnesium supplementation.

And people who have low magnesium intake are at a higher risk of type-2 diabetes.

Sleep is crucial for our health, and a lack of it can leave you feeling unrefreshed.

In fact, nearly 50% of older adults have insomnia, suffer from early awakening or poor quality of sleep.

Magnesium has been found in studies to improve our sleep quality and insomnia symptoms [25].

A double-blind randomised study found that 500mg of magnesium for 8 weeks led to increases in sleep efficiency, stress hormone and sleep duration.

Furthermore participants taking magnesium rated their sleep as improved and had a more positive mood.

This effect is more pronounced in those suffering from insomnia.

Often, athletes are at risk of magnesium deficiency.

Magnesium has a crucial role in protecting the heart.

Simply put, it does so by counteracting the contractions induced by calcium ions, helping muscles relax.

However more research is required to determine optimal supplementation protocols for athletes.

Who is at risk of deficiency?

Gastrointestinal disorders, colitis or enteritis can lead to magnesium depletion as a result of chronic diarrhea and nutrient malabsorption.

Nutritional deficiency appears to be common amongst IBD sufferers.

2. People who have alcohol dependency

Studies suggest that magnesium deficiency may contribute to osteoporosis in alcoholics.

These issues all contribute to magnesium deficiency.

3. Those with type 2 diabetes

Magnesium deficiencies can occur in people with type 2 diabetes.

The magnesium loss may occur as a result of increased urine output [27].

Those with type 2 diabetes often have elevated concentrations of glucose in the kidney.

Magnesium deficiency can cause you to age faster.

As people age, they lose the ability to regulate food intake meaning they eat less nutrients required for optimal health [28].

So taking a magnesium supplement becomes more important with age.

Once again, this illustrates magnesiums role in a vast variety of bodily processes.

Vitamin D status may serve as a rudimentary indication of magnesium deficiency.

The incidence of type 2 diabetes has increased dramatically as a result of decreased magnesium to calcium intake.

Why is testing magnesium difficult?

Blood magnesium tests are not accurate for a plethora of reasons.

Serum magnesium is not accurate for those suffering from IBD as it fluctuates extremely rapidly [33][34].

Those who have normal serum levels may possible be at risk of fractures due to poor magnesium levels in the bone.

And people that have low serum levels may have adequate levels in the bone and skeletal muscle. So it can be difficult to determine magnesium status.

Around 0.3% of total body magnesium is found in serum but more importantly, our serum levels can be replenished from our bone magnesium.

This is because our heart muscle requires a constant level of magnesium or it will stop functioning.

The body stores magnesium primarily in the bone (around 60%).

Magnesium deficiency can result in osteopenia, osteoporosis and arthiritis.

Eating a wide variety of fresh foods will lead to maintenance of your bone health [35].

An RBC test is the best way to determine magnesium status. 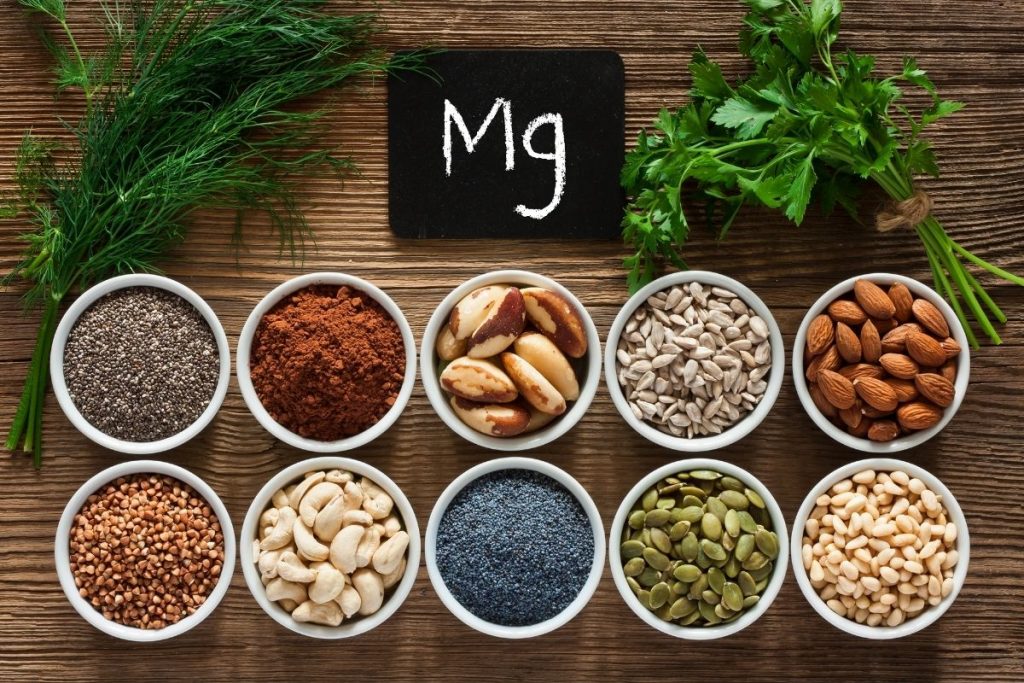 Eating a wide variety of fresh foods can help you reach optimal magnesium levels. Some foods include:

The current recommended daily intake of 300-420mg is possibly too low to achieve optimal health.

This is especially true for athletes.

However, we recommend using a lower dose to start as sudden increases in dosages will likely cause gastrointestinal discomfort.

We recommend magnesium-l-threonate and chelated forms of magnesium including magnesium glycinate and magnesium orotate as they are well absorbed.

You can purchase magnesium here.

Magnesium is extremely important and we recommend it for those who suffer from anxiety or sleep difficulty.

Magnesium deficiency can result in a wide range of cardiovascular and metabolic diseases, skeletal disorders and depression.

Most forms of magnesium sold OTC are chelated, however certain forms are sold for their effects on constipation.

The current tests for magnesium level are inadequate and RBC tests are an expensive alternative.

Calcium:magnesium ratio may be more important than magnesium deficiency alone for health.

Magnesium relaxes our muscles and works to counteract calcium which contracts our muscles.