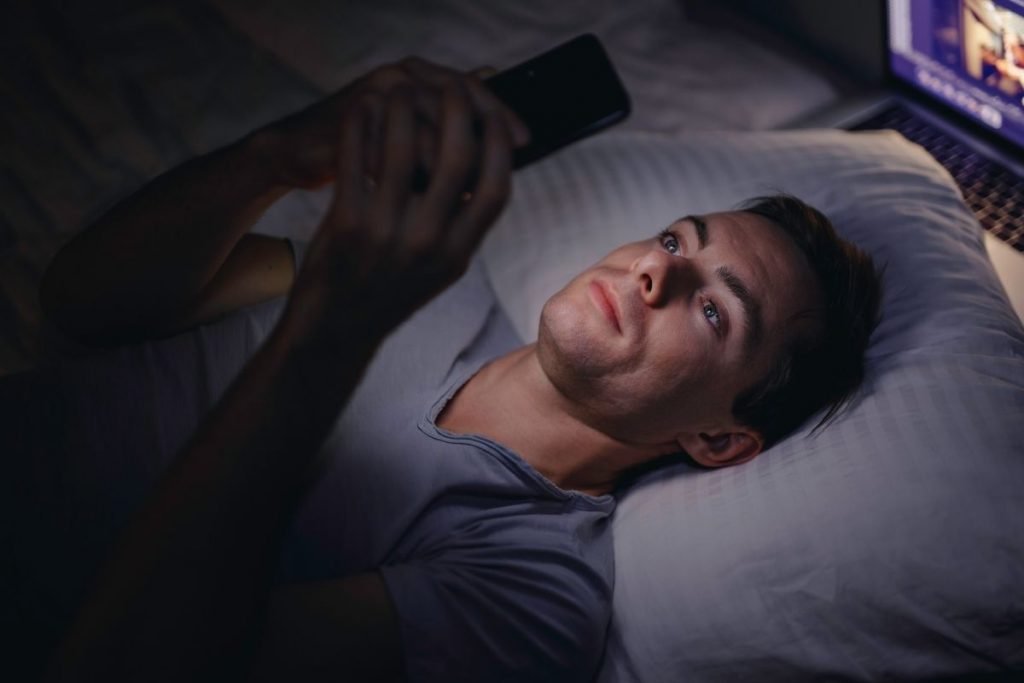 Image by Antgor via Getty Images

Melatonin is a hormone produced by the pineal gland located in the brain. It is also produced in other locations including the retina, the GI tract and inside bone marrow cells [1][2][3]. In recent decades, the gut has been identified as a major source of melatonin production [4][5]. It is highly regulated by light exposure throughout the day. Light suppresses melatonin whilst darkness promotes melatonin synthesis. Your levels of melatonin fluctuate throughout the day, and there is roughly 15 times more melatonin in your blood at night compared to the day. Blue light exposure at night lower melatonin levels, which is suboptimal.

In your body, melatonin is created from serotonin, which is derived from L-tryptophan, an essential amino acid. Oral supplementation does not appear to influence your body’s natural melatonin production. As melatonin production is heavily regulated by sunlight exposure in your retina, researchers decided to give melatonin to blind subjects [6][7]. Even a dose of 50 mg (100x higher than normal) did not influence the typical bodily production of melatonin [8].

Oral melatonin supplements can be used as a sleep aid and may also have neuroprotective effects. The role of melatonin is to decrease the time required to fall asleep however it also has other important functions, including:

Melatonin is a neurohormone that causes and regulates sleep.

Although melatonin is mostly produced in the brain it is also heavily present in the sex organs. It is a ubiquitous compound and exerts action in fat cells, blood cells and immune cells.

For sleep, melatonin may work by reducing body temperature to prime the body for sleep. This results in a shortened time to sleep but does not necessarily improve sleep quality [14].

For weight, melatonin reduced body weight and abdominal fat independent of caloric intake [15][16]. The effect was weak but did have small benefit.

Melatonin supplementation prior to bedtime correlated with improvements in antioxidant profile, BMI and blood pressure [19]. The structure of melatonin lends itself towards antioxidative properties [20]. Melatonin outperformed green tea catechins, resveratrol and alpha-lipoic acid in offering protection from DNA damage [20].

Unlike other nootropics where the dose-response obeys a positive relationship, melatonin dosage is unclear. Extreme doses of melatonin (20 mg) are often less effective than smaller (100-250mcg) and higher than normal (3-5 mg) levels of dosage.

A comparative study found that higher doses were less effective than 3 mg for insomnia symptoms in elderly people [27].

At all ages, melatonin has been shown to improve insomnia symptoms.

Melatonin supplementation reduced symptoms in children with insomnia in a long term study without any side effect [29].

2. May reduce pain associated with endometriosis

Melatonin supplementation was given to women with endometriosis associated pain, and led to improved sleep quality, and reduced pain scores by 39.8% [30]. The reduction in pain led to an 80% reduction in use of pain medication.

A dose of 5 mg melatonin reduced blood pressure by 5-6%, with a greater decrease in diastolic pressure [31].

A smaller dose of 1 mg reduced blood pressure, vascular reactivity and catecholamines such as dopamine, norepinephrine and epinephrine in men [32]. In men with higher artery pulsatility index scores in the internal carotid artery, melatonin had a greater reduction [33].

In another study, a dose of 1 mg was able to decrease adrenaline, artery blood flow and reduce adrenaline [34].

Topical melatonin products may prevent sunburn in those with sensitive skin [35][36][37]. The level of protection increased with dose, with higher concentration melatonin creams offering increased protection. The highest concentration administered in studies was 12.5%.

Melatonin can interact with telomerase enzyme which can affect lifespan. As you age, telomerase activity reduces [38][39].

The pineal gland is the primary source of melatonin in your body. Researchers placed the pineal gland of elderly rats into younger rats, which accelerated death [40]. This study was performed in response to an earlier study where surgically removing the pineal gland from young rat pups and inserting them into older mice extended lifespan by 12% [41]. These benefits are proposed to be secondary to increased melatonin.

Caloric restriction is associated with up to double the levels of melatonin in the bloodstream [42][43][44].

In a study of centenarians, it was found that levels of urinary melatonin excretion in those living the longest was more similar to young people rather than middle-aged to elder people [45]. Melatonin supplementation can restore levels as you age without affecting your body’s natural level of production.

In breast cancer patients with solid tumor cancers, melatonin has been shown in a meta-analysis to lower the risk of death after one year [46]. The relative risk of death fell to 0.66, indicating around 25% risk.

Whilst melatonin isn’t a permanent fix for those suffering from tinnitus, it can outperform placebo.

A study found that 3mg of melatonin taken for 30 days led to improvements in tinnitus matching, severity and self-rated tinnitus [47]. Around 57% of patients taking melatonin experienced benefits whilst a quarter of the placebo reported improvement.

In another study, same dosage of melatonin at 3 mg was paired with Sulodexide, a blood flow enhancing drug. This combination therapy outperformed (79.4%) both melatonin only (58%) and placebo [49]. This result was replicated [50].

Melatonin outperformed common skin care compounds such as glycolic acid when it came to antioxidant effect [51]. This may translate to benefits for skin.

Melatonin is a highly active substance that because of its lipophilic chemical structure can easily penetrate cell membranes to protect cells from oxidation [52]. It is posited that hair loss results from hair follicles undergoing oxidative stress. Topical application of melatonin appears to accelerate hair growth in alopecia patients [53].  Self-reported hair preservation rose from 12.5% in control compared to 61.5% in those taking melatonin and stimulated hair growth in 22.5% of responses [54]. This evidence is limited however.  A double-blind trial gave women a 0.1% melatonin solution daily for 6 months, and indicated an increase in the anagen hair growth phase [55].

Melatonin is found universally in plants and a variety of foods in varying quantities [61][62]. Good food sources include:

In traditional chinese medicine the best herbal sources of melatonin are [71]:

Side effects are rare as melatonin has been used in long term studies in adults and children without incidents.

However, they can include:

When applied to the skin, melatonin is safe.

The benefits of melatonin supplementation are not related to the dosage level. More does not mean a shorter time to fall asleep.

Doses between 0.5mg and 5mg appear to be beneficial for regulating sleep. Start with 0.5mg and if this is ineffective you can gradually increase dosage by smaller increments

Most studies suggest that melatonin supplementation does not result in tolerance, even over 12 months [72][73][74]. In children, melatonin has been safely used for up to 3 years without tolerance developing.

Benzodiazepines are a class of drugs (including xanax & ativan) that are used to treat anxiety, insomnia and seizures, and have withdrawal symptoms. Around 15% of those with benzodiazepine withdrawal have symptoms lasting months to years [75].

As melatonin can interact with benzodiazepine receptors, there is a concern that withdrawal or addiction can develop from taking it [76][77].

There is limited evidence suggesting that melatonin supplementation can result in withdrawal or dependence symptoms at doses of 2mg or lower. Some people may experience a ‘reactive insomnia’ however this is proposed to be a reversion to lower sleep quality.

Melatonin is widely used as a sleep aid but dosage can be difficult to determine.

For inducing sleep, there is strong evidence that melatonin can help.

However, it may not increase sleep quality itself.