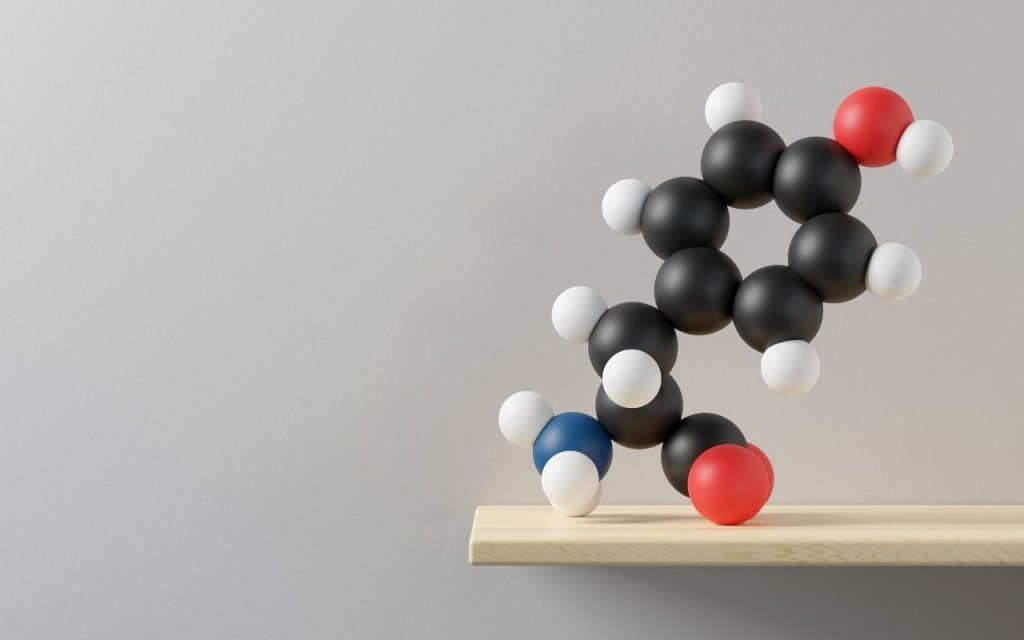 NALT is a form of L-Tyrosine used to improve attention and memory.

L-Tyrosine is an amino acid found in casein, a protein in milk and cheese.

Your body can produce L-Tyrosine on its own however it needs phenylalanine, an amino acid, to produce it.

The only way to get phenylalanine is through your diet or by supplementng.

NALT is a form of L-Tyrosine that has higher bioavailability.

The L-Tyrosine present in the body is then used to create these neurotransmitters when you require them.

In the body, L-tyrosine is derived from phenylalanine.

You can only intake phenylalanine from food, as it is an essential amino acid.

Most protein-containing foods have phenylalanine in them including beans, nuts and meats.

Supplemental L-Tyrosine is absorbed in the small intestine.

It then travels into your brain where it enters your neurons before being metabolised into catecholamine neurotransmitters including dopamine, noradrenaline and adrenaline.

You are naturally able to regulate levels of L-Tyrosine and can eliminate excess through oxidation and other metabolic processes.

Those who argue against supplementing L-Tyrosine reason that due to bodily regulatory processes enforcing a narrow range, the benefits are minimal.

Despite this, studies have found benefits for mood, stress tolerance and memory. 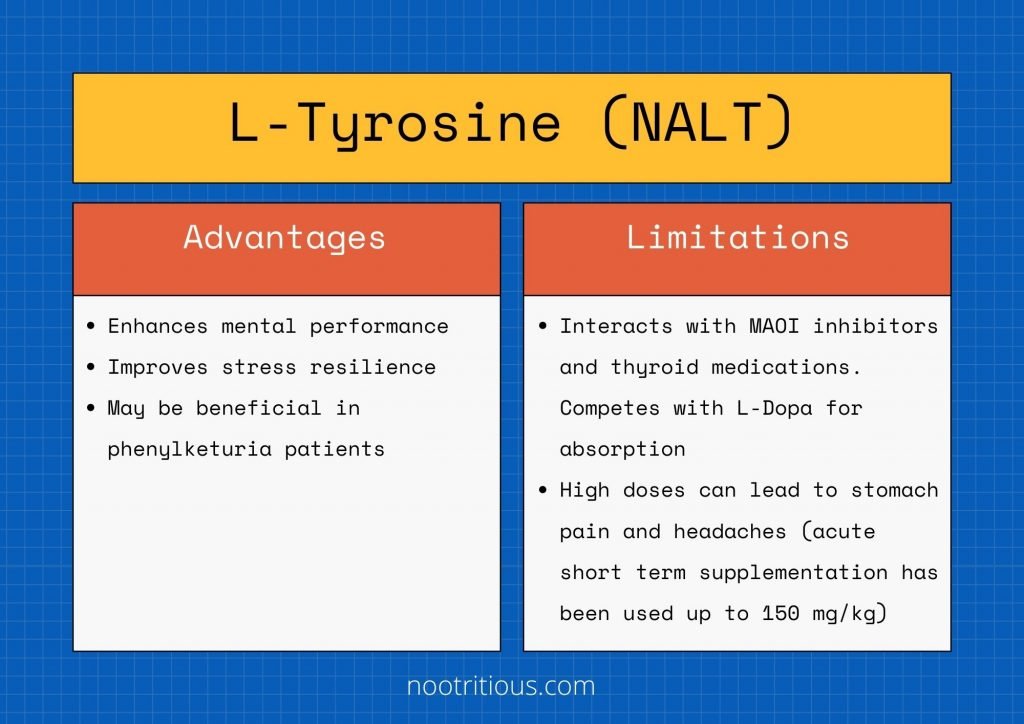 L-Tyrosine (NALT) can boost neurotransmitters including dopamine and noradrenaline.

It’s primary benefits are not physical, however athletes and those requiring focus can benefit as NALT improves focus during stress.

There appears to be little to no difference between L-Tyrosine and NALT in the science. However, the increased water solubility of NALT is purported to produce a greater mental benefit through your blood-brain barrier.

In literature, these catecholamines have been found to exert antioxidant effects [1].

1. May improve cognitive performance under stress

NALT and L-Tyrosine may improve psychological functioning in stressful situations such as high cognitive load.

In clinical trials, L-tyrosine has been shown to improve alertness and memory functioning during stressful situations [2][3].

L-Tyrosine is able to replenish brain catecholamine levels, allowing us to continue performing through stress.

In certain cases, sustained work during sleep deprivation is unavoidable. However performance on cognitive tasks is negatively affected with limited sleep. If you are in a stressful occupation that requires urgent work then NALT supplementation may be beneficial.

In one study, 150 mg/kg L-Tyrosine ameliorated performance decrements associated being awake for more than 24 hours [4].

This means that L-Tyrosine can boost prevent neurological deficits that occur as a result of sleep loss.

In another study, the supplementation of 2 grams of L-Tyrosine, five times per day in those undergoing stressful combat training (10grams per day effective dose) led to an improvement performance in memory performance [5].

In the same study, decreased blood pressure and adrenaline levels were found after L-Tyrosine supplementaion (2g x 5 times per day).

Exposure to cold leads to increased cortisol, and increased errors on a memory test. This was accompanied by increases in self-reported tension, depression and confusion [6].

However those given a L-Tyrosine containing food (150 mg/kg) who took the same memory test had more correct responses.

In those suffering with phenylketuria (PKU), their bodies are unable to process phenylalanine [7].

Long term build-up of phenylalanine in the body results in seizures, behavioural problems and brain damage.

This is because they lack the enzyme phenylalanine hydroxylase.

Your body requires this enzyme to produce L-tyrosine, which is required to produce neurotransmitters.

At the same time, the phenylalanine is unable to be converted due to the lack of the enzyme.

Therefore, it is believed taking L-Tyrosine as a supplement may help to reduce the symptoms of phenylketuria.

However L-Tyrosine supplementation had no effect in terms of quality of life, mood or cognitive performance [10]. It is recommended in studies to use special medical food products containing tyrosine [11][12][13].

In those undergoing combat training, the supplementation of tyrosine at 10g per day led to a reduction in blood pressure [5].

However this decrease was small and required a large dosage.

There was a decrease in diastolic blood pressure 15 minutes after ingestion which disappeared after one hour.

The evidence for blood pressure is insufficient.

Per 100 grams, the foods containing the most L-Tyrosine include:

Generally, L-Tyrosine side effects are minimal as it is an amino acid that your body can make naturally.

However it may interact with certain medications including MAOI inhibitors, Synthroid, Levothroid and Levodopa.

If you have digestive issues, it is recommended to split dosages into two doses, spaced half an hour apart.

Elevated dosages may lead to stomach pain, nausea and headaches. Allergic reactions are rare and range from hives to swelling of the face and throat.

Due to a lack of evidence, pregnant women, nursing mothers and children should not take L-Tyrosine supplements.

L-Tyrosine is “generally recognised as safe” by the Food and Drug Administration [17].

Dosages are often split throughout the day. Anecdotal use generally involves dosages of 500-2000mg before a stressful event.

NALT is the form of L-Tyrosine that is more water soluble. Like L-Tyrosine, it is retained well in the body and can be used to meet your amino acid needs [18][19].

Supplemental L-Tyrosine has been shown to be safe at doses of up to 150 mg/kg [20]. For someone weighing 60 kg, this would be around 9 grams per day.

There is no known recommended daily intake for L-Tyrosine. However, certain doses have found benefit in the literature:

L-Tyrosine typically comes in 500 mg capsules with a recommendation of around 1500 to 2000mg.

L-Tyrosine is necessary for the formation of important catecholamines in your brain.

These include noradrenalin, adrenaline and dopamine, which affect your sense of mood.

There is evidence for L-Tyrosine helping to prevent a loss in cognitive performance during certain stressful situations including cold weather, sleep deprivation and loud noises.