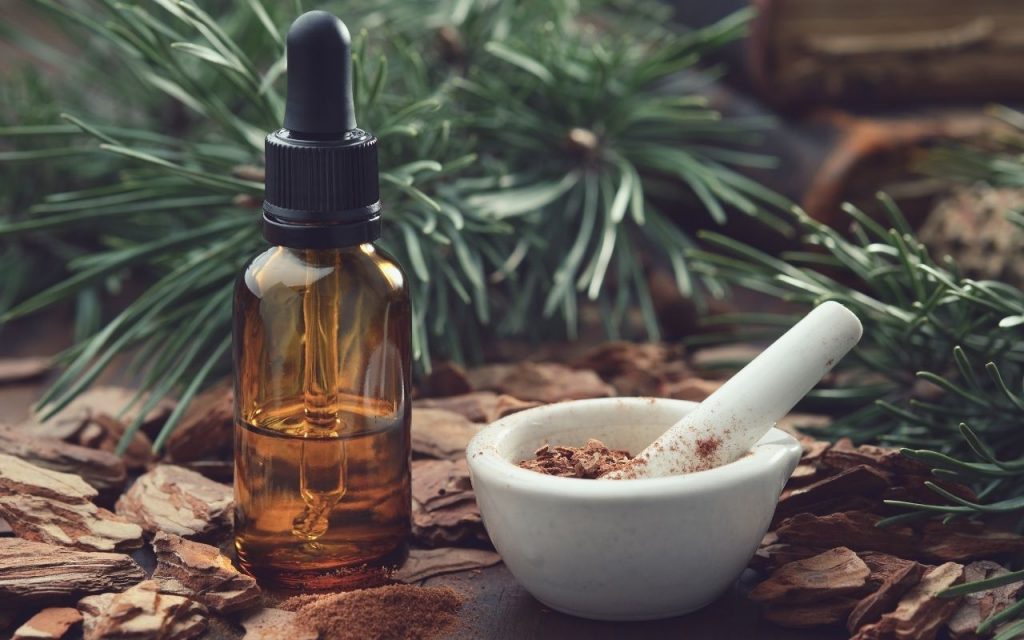 Pine bark extract is a mixture extracted from pine bark for medicinal use.

This article refers to a specific pine bark extract known as Pycnogenol which is derived from the French maritime pine bark (Pinus pinaster).

Although pycnogenol has also been referred to as pinus maritima, the majority of products available today refer to pine bark extract as pinus pinaster [1]. They are largely interchangeable.

Pine bark extract contains procyanidins, which are a type of polyphenol and flavonoids.

It is suggested in research that these compounds are responsible for the antioxidant and anti-inflammatory action of pycnogenol.

Many forms of pine bark extract have similar benefits.

These forms of pine bark extract each have their own benefits. For example, Pinus densiflora may be even more effective than pycnogenol (pinus pinaster) [2]. However their mechanism of action are similar. Pine bark extract has been used for a number of benefits including for skin health, improved attention and blood circulation. 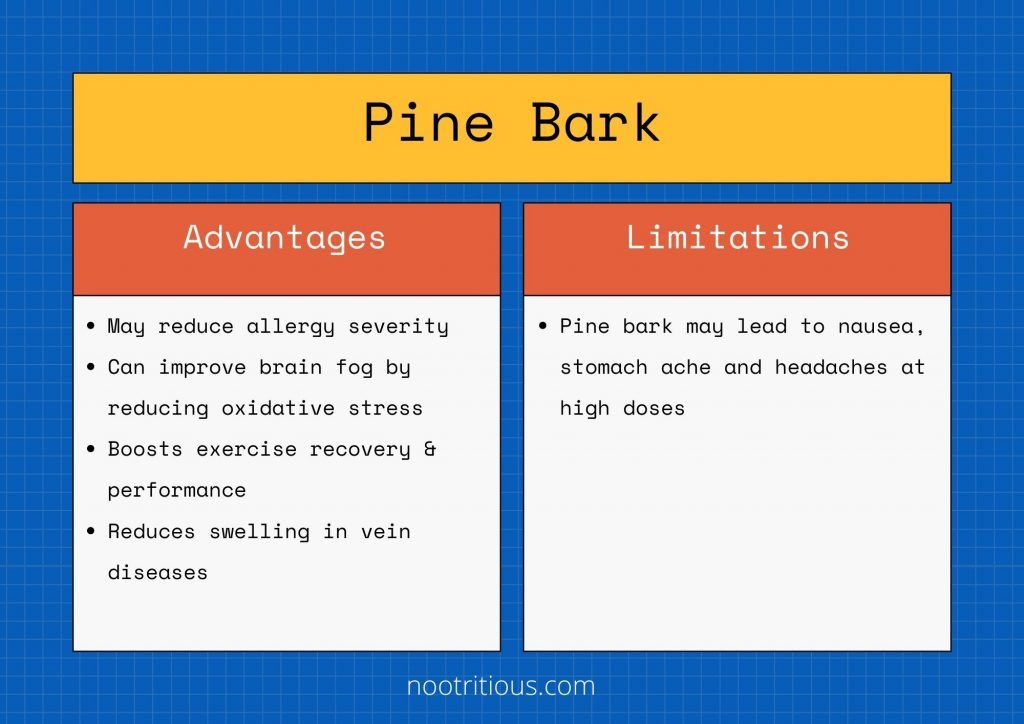 Pine bark extract is typically sold as Pycnogenol. This is the registered trademark form of a French species of pine bark.

Procyanidins often occur as phenolic acids, catechins and taxifolin, which are small antioxidants.

The longer-chain antioxidants that form procyanidins reach your colon where they are broken down into active metabolites.

These longer-chain compounds appear in the blood 6 hours after ingestion and remain for at least 14 hours, providing a long-term benefit to combat inflammation in your body [3].

The downstream compounds of pine bark extract can be detected in blood cells, serum and synovial fluid, where they exert their benefits.

1. May reduce asthma and allergies

No adverse effects were observed.

In children with mild-to-moderate asthma pine bark extract was able to reduce or discontinue the use of rescue inhalers [5].

Pine bark extract at doses of 100 mg/day has been shown to reduce the incidence of cough, night-awakenings and need for additional medication [6].

Combined with inhalers, 55% of those taking pine bark extract reduced their inhaler dosage and frequency of use.

As a nootropic, pine bark extract in the form of pycnogenol is promising.

This indicates that pine bark extract is not only beneficial, but can be taken safely for long periods.

In those with cognitive impairment, taking pine bark extract led to an 18% increase in a mental function exam compared to 2.5% in the standard treatment group [9].

The reason for the positive result is thought to be as result of pine bark extract’s effects on oxidative stress levels.

It is important to clarify however brain fog is not a medical condition but rather a symptom.

It may indicate excess stress, an undiagnosed medical condition, dietary issues, a response to medication or lack of sleep.

Microangiopathy is a disease causing reduced blood flow throughout the body.

This may lead to a loss of organ, nerve and tissue health [10]. It is also associated with cramps and pain.

Pine bark extract was found to reduce muscular pain at rest and during/after exercise in both healthy persons and diabetics with microangiopathy [11].

The same study found that taking pine bark extract at a dosage of 200 mg/day provides benefits to athletes prone to cramps.

For athletes, the best Pine Bark Extract we have identified is Life Extension Pycnogenol. (Keep in mind we do receive an income from affiliate links – so you are helping with your support).

The dose was split into 4 x 50 mg capsules per day and patients were instructed to drink at least 1.5L of water per day.

Significant reductions in cramp episodes were exhibited after 4 weeks and 8 weeks after beginning treatment.

In patients with severe hypertension and venous ulcerations, pine bark extract led to improvements in symptoms of microangiopathy [12].

Microangiopathy occurs due to dysfunction in the small blood vessels and can be accompanied with pain.

This results in excess fluid being trapped in your body, or edema.

This can be visually unpleasant and painful.

Pine bark extract may reduce leg swelling and spider veins according to a study of women who recently gave birth [14].

At doses of 100 mg/day, pine bark extract had a higher compliance rate and was more effective than alternative treatments such as wearing compression socks.

Another clinical trial found that pine bark extract at doses of 100 mg/day can possibly improve running, sit-ups and push-up endurance in recreational athletes [18].

The same study found that professional athletes preparing for an endurance event involving running, cycling and swimming improved their performances from taking pine bark extract. There was also a significant decrease in post-run pain and cramps.

Dosages in studies vary from 50mg-450mg daily for up to one year study .

Pycnogenol is a standardised form (65-75% procyanidins) of pine bark.

The price premium of pycnogenol compared to other species of extract can vary, however it can be up to 3-4x the price of other pine bark extract.

The reason for the price disparity is due to different species (chinese red bark vs french maritime bark) but also due to the consistency in product that a patented version allows.

Low doses are recommended for initial consumption as high doses can result in side effects including nausea and headaches.

Pycnogenol Can be taken with or without food.

Pine bark extract is typically sold as a standardised extract (65-70% procyanidins) under the brand name pycnogenol.

The optimal dosage is unknown, but studies using a range of 100-200mg/day have uncovered improvements in cognitive function and blood circulation.

Other benefits include a reduction in allergies and asthma symptoms.

It can improve blood flow and venous issues leading to improved recovery.

Therefore athletes may want to consider pycnogenol for it’s effects for recovery and performance.