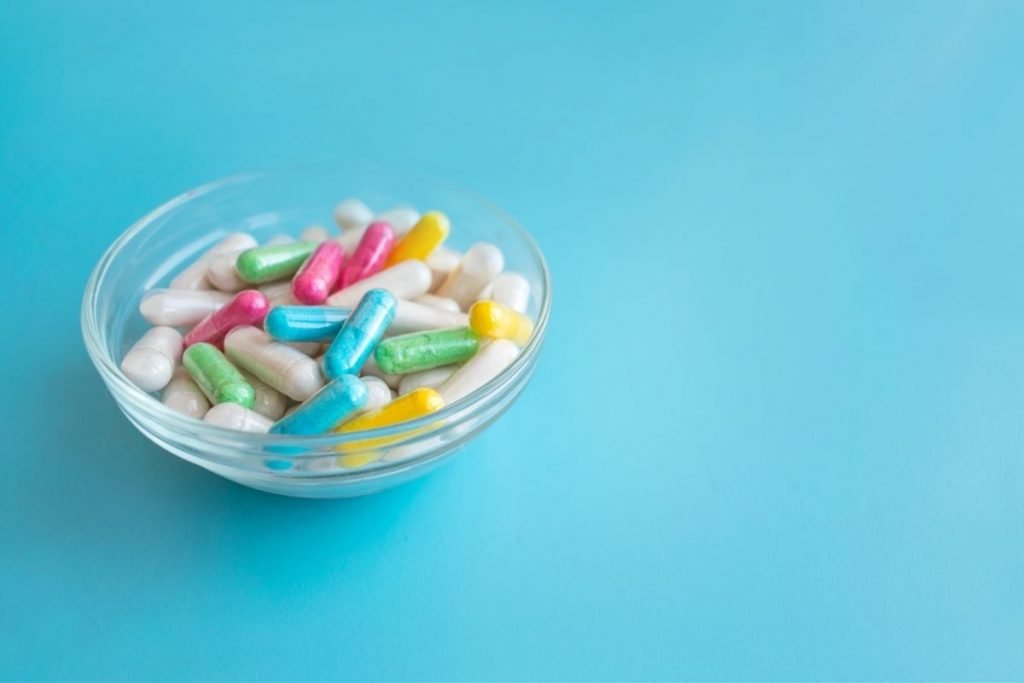 Piracetam (nootropyl) is the first nootropic created in the racetam class.

Piracetam was originally created in 1971.

The Racetam class are synthetic supplements that boost brain function. Piracetam is often considered the ‘mother of synthetic nootropics’.

For those who are at risk of cognitive decline, seizures or simply want to improve their learning, piracetam might benefit.

The way piracetam improves our health is by limiting the adhesion of harmful beta amyloids.

These amyloids are implicated in Alzheimer’s disease and dementia.

Piracetam is able to reinforce our cell functions.

Who is it for?

Piracetam has the largest effect on people in a state of cognitive decline, especially the kind that comes with aging.

Those suffering from myoclonic jerks and alcohol withdrawal may benefit.

It is important to purchase piracetam from a company that conducts third party tests. 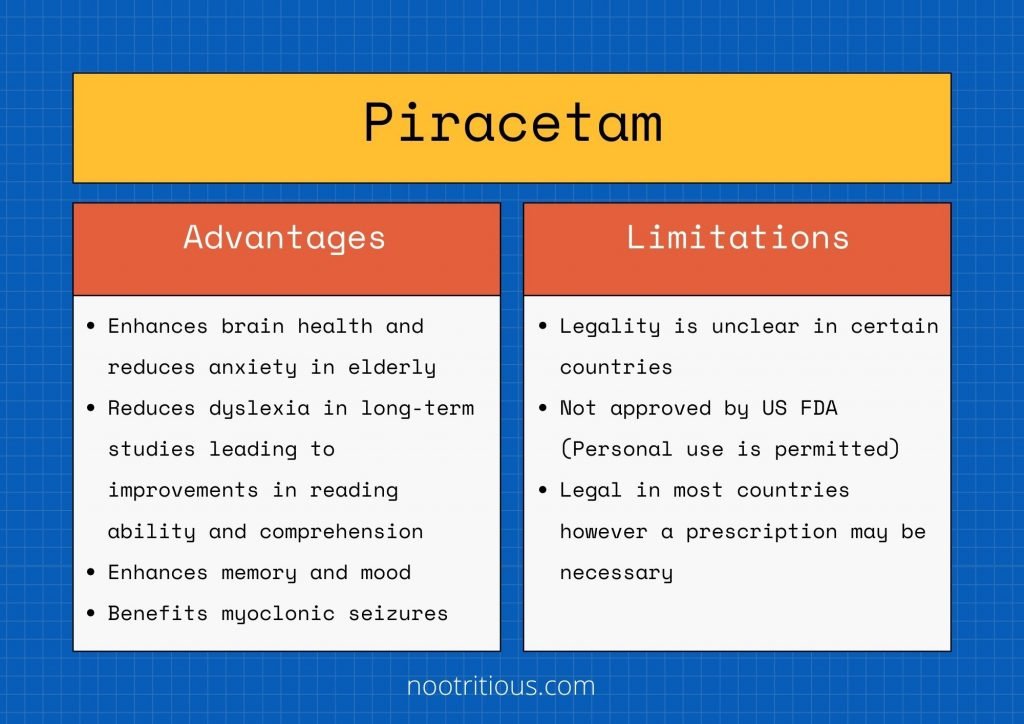 Nootropics Depot is a reputable company that tests their nootropics indepently (ISO Lab).

Piracetam makes our cells stronger by reinforcing the cell membrane.

The second way piracetam improves our health is it increases the flow of our red blood cells. This results in more blood flow to key areas of our body including our brain and organs.

Piracetam alters the structure of our phospholipid membrane to change membrane function and increase fluidity.

Piracetam acts by reversing the harmful effects of beta-amyloid peptides which cause our nerves to die.

Beta-amyloid plaques have been implicated in dementia and Alzheimers disease.

The way that piracetum does this is by changing the shape of the membrane in the opposite way the amyloid peptide does.

When amyloid-peptides change the structure of our membranes, they cause neuronal death – and piracetam stabilises the membrane to ensure optimal function.

Magnified mechanism: The Beta-amyloid peptides induce a negative curvature in the phospholipid membrane.

In the opposite vein, piracetam works by interaction with the polar heads (water-soluble) in the phospholipid membrane to induce a positive curvature of the membrane.

By occupying the polar groups in the phospholipid membrane the negative curvature induced by beta amyloid peptides is mitigated.

The overall effect is a reinforcement of the existing cell structure.

It does so by increasing the fluidity of platelet membranes resulting in smooth blood flow.

This means blood flow to all parts of the body, including the brain.

Supplementation of piracetam has been shown to reduce adhesion of red blood cells.

This leads to better circulation and has led to piracetam being used in the treatment of sickle cell anaemia.

Piracetam is detected in all tissues except your adipose tissue.

Piracetam also increases glucose and oxygen consumption in the brain which is a precedent of cognitive improvement.

It appears to increase AMPA receptor density in the brain.

This may be due to its being derived from GABA, which is closely linked to AMPA activity.

In addition to its ability to counteract amyloid plaques, piracetam supplementation appears to maintain membrane fluidity which may result in improved neuroplasticity and brain function.

1. Piracetam may offer a Cognitive boost

Piracetam helps us to learn by altering our neural plasticity.

There is strong evidence that piracetam is promising in improving symptoms associated with dementia, anemia, vertigo and dyslexia.

Piracetam is the first nootropic that does not cause a stimulatory effect, like caffeine, or a sedative effect.

Supplementation of piracetam increases brain function in those who are most susceptible to cognitive decline, namely older adults.

It did so without any major side effects.

In a study of 78 elderly in Germany, the dose-dependent nature of piracetam was uncovered.

Those given dosages of 3x800mg per day did not exhibit any improvement in cognitive function.

Therefore protocols should begin with a larger dose.

The improvements in brain function were seen only in those given dosage of 3x1600mg per day [2].

Piracetam dosage has a definitive effect on the benefit to the user.

It also increases the blood flow to the brain.

GABA levels also increased which may indicate a reduction in anxiety.

These are all factors that improve your mood on a daily basis.

Those with dyslexia understand how debilitating this condition can be. Supplementing piracetam has been shown to improve verbal learning and intelligence as measured by standardised tests in those with dyslexia. Long-term supplementation appears to maintain this improvement.

Those supplementing should not expect results for at least 10 days, as most results are seen after this period of time.

Those struggling from dyslexia understand how difficult this condition makes learning, reading and writing.

Piracetam has been shown to improve aspects of learning for those suffering from dyslexia with no side effects.

A double-blind study found that piracetam supplementation of 1.6g per day led to an increase in verbal learning after 2 weeks.

Interestingly, no effects were seen after one week so this indicates that those supplementing should not expect results immediately [6].

Another study of 21 days found that supplementation of piracetam led to a 15% improvement in verbal learning scores and 8.6% for healthy subjects [7].

This meant that those suffering from dyslexia benefited twice as much as healthy subjects, but healthy subjects still recorded improvements so supplementation may be beneficial in this use case.

A longer 36-week, double-blind study of 225 children suffering from dyslexia found that piracetam led to increases in reading ability and comprehension.

The treatment was effective after 12 weeks, and continued supplementation for the total 36 weeks maintained the heightened intellectual ability [8].

Children taking piracetam should be given a smaller dose of around 40-100 mg/kg/day to begin.

Piracetam dosage of 1.6-4.8g/d may improve verbal learning in healthy humans after 2 weeks of supplementation.

For healthy humans, there are few studies examining the effects of piracetam.

Memory is one of the first things that people struggle with as they begin to age.

The good news is that piracetam appears to work best for those susceptible to memory decline.

In Europe, piracetam has been used for decades to improve memory.

Piracetam might make you feel less agitated and reduce your pain susceptibility.

This may be due to piracetam being a derivative of GABA, an important neurotransmitter.

GABA levels are predictive of anxiety and depression.

It is thought the benefits of piracetam are linked to its relationship to GABA, which has been shown to reduce myoclonic seizures and improve mood.

The subjects given piracetam had a lowered level of agitation compared to placebo with no side effect.

Piracetam has extremely strong evidence that it reduces the severity of breath-holding spells in children. The mechanism is not well understood. Supplementation of 40-100 mg/kg were all effective, with higher doses leading to better results.

Breath-holding spells begin in children from the age of 6 to 18 months.

Breath-holding spells may result in a child fainting and are a frightening experience.

Piracetam supplementation has been found to completely eliminate breath-holding spells in multiple studies [10][11][12].

In a randomised double-blind study, 50mg/kg bodyweight Piracetam daily for 4 months was associated with a significant reduction in breath holding spells per month; from 5 on average to a variable 1-2 with most benefits observed after 1 month.

No side effects noted in these children.

Piracetam doses of 50-100mg/kg daily were effective in abolishing 81% of BHSs in children, reduced frequency in 9%, with no significant effect on 10%. No side effects were noted in these children ranging 4 weeks to 5 years old.

Piracetam counteracts persistent inflammation. It does so by limiting the action of cytokines. There is also minor evidence that piracetam secondarily increases pain tolerance. However, better sources for anti-oxidant effects exist and its use as an analgesic remains novel.

Piracetam has been shown in animal studies to have antioxidant effects.

Persistent inflammation is linked to cancer, diabetes and kidney disease.

As you age, your body’s level of powerful antioxidants decreases.

Glutathione levels heavily decrease with age but piracetam supplementation can restore and boost these levels.

The supplementation of piracetam suppresses the production of inflammatory cytokines which are implicated in long-term disease risk.

In those undergoing surgery, a comprehensive meta-analysis revealed that piracetam had a neuroprotective effect [13].

The symptoms of dementia are life-altering and affects everyone exposed to it. Alzheimers disease occurs when beta-amyloid peptides clump up to form plaques between nerve cells. Taking piracetam reverses the effects of the beta-amyloid peptide to reinforce our cell membrane, making it resistant to degradation. Doses of around 4.8 grams per day were effective.

Those who suffer from or know someone suffering from dementia can tell you the life-altering effect it has on memory, communication and the ability to live a normal life.

The action of beta-amyloid plaques or adhesions appear to cause Alzheimer’s by attacking the cell membrane.

Piracetam prevents beta-amyloid plaque formation by counteracting beta-amyloid action. These beta-amyloid peptides change the shape of our membranes, killing the cell. Exposure to piracetam makes the membrane resistant to this effect, preserving our memory and concentration.

Myoclonus is extremely debilitating. Those suffering from cortical myoclonus may benefit from supplementing piracetam and studies have used up to 24g/d.

These seizurees consist of irregular and uncontrolled muscle jerks.

For sufferers, this can progress to epilepsy.

Piracetam may treat myoclonus as evidenced by multiple studies.

The only side effects were drowsiness and dizziness in 2 subjects [14].

There have been studies that show the dose-effect relationship is linear and significant.

In one study of those suffering with Unverricht-Lundborg disease (severe myoclonic epilepsy), treatment with 24g/day of piracetam produced significant and clinically relevant improvement in functional disability and motor impairment [16].

These studies however are outdated and newer sources are required.

We recommend a dosage of around 80-100 mg per kg of bodyweight.

For adults: studies use a dosage of 3 x 1600mg daily (4800 mg total) which is shown to be well-tolerated with no major side effect.

When you take piracetam, it is important that doses should be taken three times per day, as this has been shown to offer best results for cognition.

It usually takes 2-3 weeks for piracetam to be work.

Once piracetam begins to work, a maintenance dose is required to continue benefiting from effects.

Our body does not store piracetam in long-term.

It is not necessary to take it with food.

Disclaimer: Contact your medical practitioner to find out if Piracetam is viable for your situation.

How does it leave the body?

Piracetam is excreted in the urine where 90% is not processed.

Piracetam is not stored in your adipose tissues.

Piracetam is an excellent way to improve your brain function.

It is well tolerated and healthy people supplementing benefit from increased focus, health and memory.

Those people who are undergoing surgery should consider taking piracetam as it prevents a postoperative decline in cognitive abilities.

Supplementation is the only way to take piracetam.