PQQ levels in foods are 10 times the amount found in our bodies.

While our body can make PQQ, foods remains the best source. 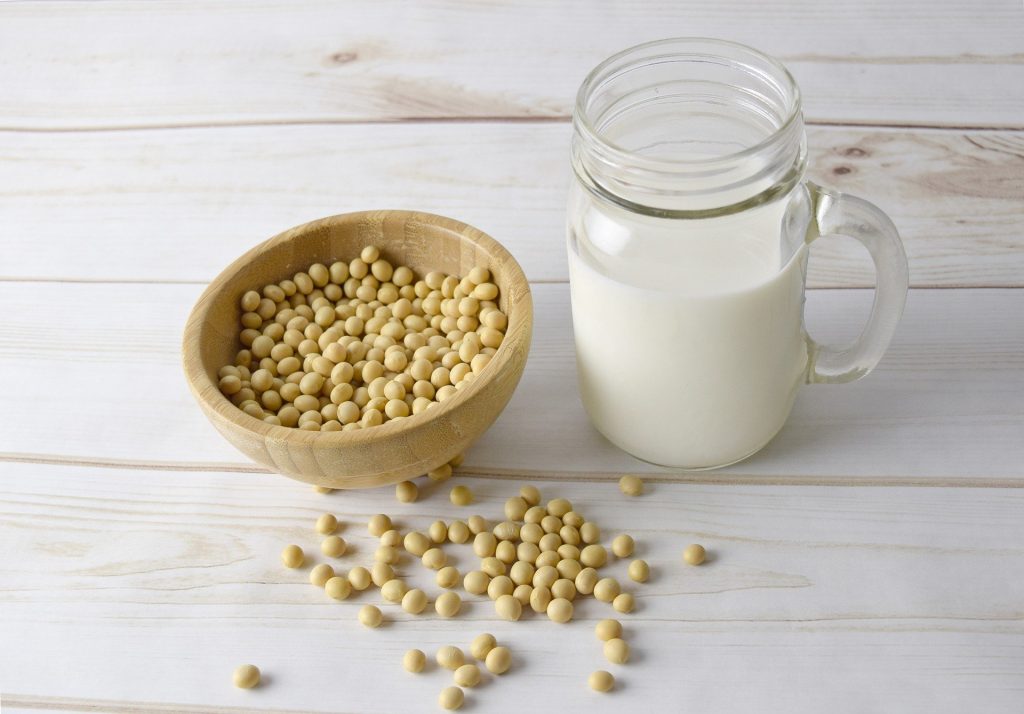 PQQ also known as pyrroloquinoline quinone is a compound that has antioxidant properties.

There is strong evidence that PQQ improves mitochondrial efficiency in our bodies.

Proponents for PQQ argue that it can increase mental focus, longevity and energy.

As an antioxidant, PQQ is very stable and can undergo 20,000 catalytic cycles.

PQQ exerts its antioxidant activity in a special type of protein called quinoproteins found in our cells.

It also appears to be offer neuroprotection according to human studies.

In healthy people given PQQ at dosages of 5-20 mg, there is strong evidence for mitochondrial efficiency improvements in studies.

How is PQQ produced?

PQQ is made in nature by bacteria and supplement companies mimic this bacterial process [1].

It is an enzymatic cofactor (meaning it is required to work) for several bacterial dehydrogenases [2].

PQQ is classified as a non-vitamin, and is found in breast milk.

The soil bacteria provide nutrients including PQQ to plants.

In plants, PQQ is stable at quantities around 10 times higher than in our bodies.

We derive PQQ in our diet from natural sources such as soy products, green tea and cocoa.

How to benefit?
Those eating a balanced diet containing dark chocolate, spinach and soy products are receiving plenty of PQQ in their diet. Improvements in mitochondrial function were seen from supplementation in adults at dosages of 5-20 mg with minimal side effects. 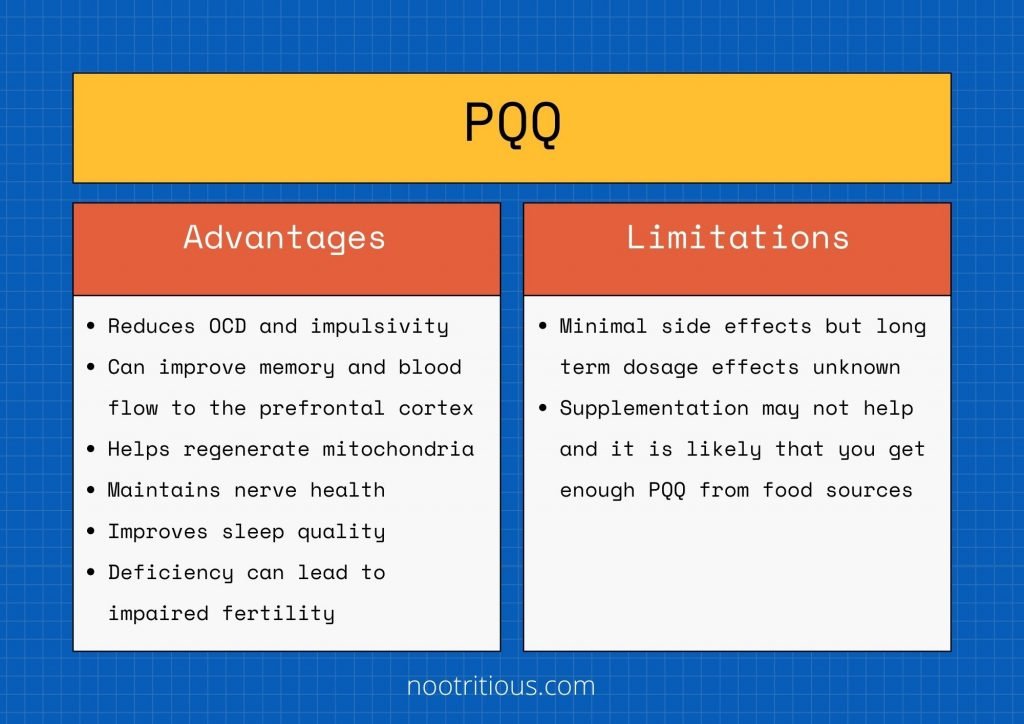 PQQ is commonly taken in combination with Coenzyme Q10 for the potent synergistic effects.

For those wanting the greatest sleep benefits, we recommend combining with Magnesium L-Threonate and L-Theanine.

In the body, PQQ reduces the activity of an enzyme known as thioredoxin reductase 1 (TrxR1) [3].

The reduction of TrxR1 appears to increase Nrf2 activity.

This is because they oppose one another.

By increasing Nrf2 activity, PQQ results in this increase in antioxidant production [4].

A binding protein known as CREB needs PQQ to produce new mitochondria. In simple terms, PQQ is required to produce brain-derived neurotrophic factor (BDNF) which plays a crucial role in our cognition by generating brain cells.

1. May improve sleep quality and duration

PQQ possibly improves the quality of our sleep.

A study gave subjects a 20 mg dose of PQQ everyday to examine its effects on sleep quality [5].

All human subjects had prior issues with fatigue and falling asleep within a reasonable time frame.

After 8 weeks, PQQ supplementation led to a significant reduction in time taken to fall asleep and improved overall sleep quality [5].

PQQ reduced the release of pro-inflammatory mediators such as TNF-alpha which may indicate an analgesic effect [6]. It also led to a preservation of muscle.

A study found that appetite, obsession and pain tolerance all improved with PQQ supplementation after 8 weeks of 20mg per day [5].

This may be due to two mechanisms by limiting oxidative stress and heightened mitochondrial density.

Mitochondrial biogenesis in rats has been shown in response to PQQ intervention.

PQQ also limits the effects of mitochondrial inhibition which can lead to dysfunction. [8]

This makes it a promising treatment for mitochondrial dysfunction.

PQQ has been evidence for boosting nerve health and recovery.

In one study, injured nerves in rats that received vitamin E and PQQ had significant regeneration in terms of number and size of myelinated fibres compared to control [9].

Gains in nerve growth were greatest in vitamin E+PQQ compared to rats only treated with vitamin E or placebo.

According to the authors of the study, PQQ has a remarkable effect on enhancing nerve regeneration in peripheral nerves that exhibited physical damage.

This effect is hugely promising for those suffering from the debilitating symptoms of peripheral neuropathy.

Mitochondria are responsible for providing energy for you to function throughout your day.

The benefits of PQQ may be understated. Bruce Ames suggests that PQQ could be classified as a longevity vitamin.  PQQ appears to ameliorate the effects of mitochondrial inefficiency that accelerates with our age [12].

PQQ supplementation has been shown to improve antioxidant activity in humans as measured by plasma C-reactive protein levels and interleukin-6 [14].

These are measures of inflammation in our body.

The same study found improvements in mitochondria efficiency which may be linked to secondary effects including muscle retention and body fat loss.

PPQ is able to exert its effects much more efficiently than vitamin C [15][16].

More studies are needed in humans.

In one study, 20mg of PPQ daily for 8 weeks led to improved pain tolerance [18].

PQQ was also found to improve sleep quality and duration.

PQQ has numerous physical and mental benefits. Due to its role in fighting oxidative stress, PQQ is vital for our mitochondrial health and efficiency.

In an animal study, PQQ deprived young died at twice the rate compared to subjects that received 100-5000ng PQQ/g supplementation. [19]

PQQ has a role in interleukin 2 production, an important growth factor however this is not well understood.

Over 20 weeks, adult subjects fed a diet high in PQQ produced almost double the number of offspring compared to the deficient group [20].

PQQ may improve fertility by increasing the cellular regeneration process, which deteriorates as we age.

Reduced cellular quality as we age is implicated in wide ranging number of diseases and can be improved by taking PQQ.

Even though PQQ can be found naturally in foods such as kiwi and green tea, PQQ supplementation is a safe and effective way to get more dietary PQQ.

PQQ deficiency has been linked to reduced mental capacity.

Reactive nitrogen species are related to brain injuries such as strokes and other diseases including cancer.

PQQ acts as a superoxide scavenger rather than interacting directly with reactive species [21].

An increase in Insulin resistance

Enhancements in mitochondrial efficiency have been shown to minimise the risk of fat-induced insulin resistance which is a common risk factor in numerous diseases such as stroke, heart attack and cancer.

The elementary understanding is that PQQ suppresses an enzyme called protein tyrosine phosphatase 1b (PTP1b) [22] [23].

Further research is required to uncover the mechanisms behind PQQ effect on insulin sensitivity.

How does PQQ feel?

Dosages of 5-20mg daily have not triggered any side effects.

Clinical studies with human subjects typically use 20 mg daily for up to 12 weeks to achieve benefits although benefits have been seen in much shorter time periods.

If you’re eating a nutritious diet then you are likely receiving all the PQQ you need from your diet.

If you’re older however, you will likely see benefit from PQQ supplementation.

Regular consumption of these listed ingredients will help ensure that you are getting all the PQQ required for general health [24].

PQQ dosages of 5-20 mg have been used without side effects.

Side effects of PQQ are minimal from short-term use (less than 12 weeks).

Long-term dosage has not been examined in human subjects.

PQQ has an important role in human health due to its effect on mitochondrial function however further research is necessary.

PQQ is a safe nootropic and has numerous benefits for energy, sexual health and general well-being, whilst at the same time gaining evidence for its effects on life extension.

PQQ supplements are well tolerated but you likely get enough PQQ if you eat soy products, leafy greens and dark chocolate. For other people, supplementing may improve your sexual health, energy levels, sleep quality and memory.

Fun fact: PQQ is found in stardust. That’s right! The same compounds that make up interstellar stars in space can be found here on Earth in our soil and foods.

Nootritious only uses information from select peer-reviewed studies, medical associations and research institutions. It is our strict adherence to this policy that allows us to delivers accurate and actionable advice.